The history of Herodotus - Volume 2 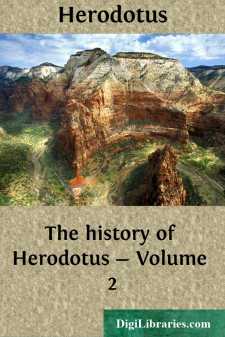 BOOK V. THE FIFTH BOOK OF THE HISTORIES, CALLED TERPSICHORE

1. In the meantime those of the Persians who had been left behind in Europe by Dareios, of whom Megabazos was the commander, had subdued the people of Perinthos first of the Hellespontians, since they refused to be subject to Dareios. These had in former times also been hardly dealt with by the Paionians: for the Paionians from the Strymon had been commanded by an oracle of their god to march against the Perinthians; and if the Perinthians, when encamped opposite to them, should shout aloud and call to them by their name, they were to attack them; but if they should not shout to them, they were not to attack them: and thus the Paionians proceeded to do. Now when the Perinthians were encamped opposite to them in the suburb of their city, a challenge was made and a single combat took place in three different forms; for they matched a man against a man, and a horse against a horse, and a dog against a dog. Then, as the Perinthians were getting the better in two of the three, in their exultation they raised a shout of paion, and the Paionians conjectured that this was the very thing which was spoken of in the oracle, and said doubtless to one another, "Now surely the oracle is being accomplished for us, now it is time for us to act." So the Paionians attacked the Perinthians when they had raised the shout of paion, and they had much the better in the fight, and left but few of them alive.

2. Thus it happened with respect to those things which had been done to them in former times by the Paionians; and at this time, although the Perinthians proved themselves brave men in defence of their freedom, the Persians and Megabazos got the better of them by numbers. Then after Perinthos had been conquered, Megabazos marched his army through the length of Thracia, forcing every city and every race of those who dwell there to submit to the king, for so it had been commanded him by Dareios, to subdue Thracia.

3. Now the Thracian race is the most numerous, except the Indians, in all the world: and if it should come to be ruled over by one man, or to agree together in one, it would be irresistible in fight and the strongest by far of all nations, in my opinion. Since however this is impossible for them and cannot ever come to pass among them, they are in fact weak for that reason. They have many names, belonging to their various tribes in different places; but they all follow customs which are nearly the same in all respects, except the Getai and Trausians and those who dwell above the Crestonians.

4. Of these the practices of the Getai, who believe themselves to be immortal, have been spoken of by me already: and the Trausians perform everything else in the same manner as the other Thracians, but in regard to those who are born and die among them they do as follows:—when a child has been born, the nearest of kin sit round it and make lamentation for all the evils of which he must fulfil the measure, now that he is born, enumerating the whole number of human ills; but when a man is dead, they cover him up in the earth with sport and rejoicing, saying at the same time from what great evils he has escaped and is now in perfect bliss....