The history of Herodotus - Volume 1 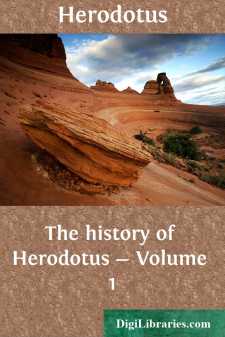 If a new translation of Herodotus does not justify itself, it will hardly be justified in a preface; therefore the question whether it was needed may be left here without discussion. The aim of the translator has been above all things faithfulness—faithfulness to the manner of expression and to the structure of sentences, as well as to the meaning of the Author. At the same time it is conceived that the freedom and variety of Herodotus is not always best reproduced by such severe consistency of rendering as is perhaps desirable in the case of the Epic writers before and the philosophical writers after his time: nor again must his simplicity of thought and occasional quaintness be reproduced in the form of archaisms of language; and that not only because the affectation of an archaic style would necessarily be offensive to the reader, but also because in language Herodotus is not archaic. His style is the "best canon of the Ionic speech," marked, however, not so much by primitive purity as by eclectic variety. At the same time it is characterised largely by the poetic diction of the Epic and Tragic writers; and while the translator is free to employ all the resources of modern English, so far as he has them at his command, he must carefully retain this poetical colouring and by all means avoid the courtier phrase by which the style of Herodotus has too often been made "more noble."

As regards the text from which this translation has been made, it is based upon that of Stein's critical edition (Berlin, 1869-1871), that is to say the estimate there made of the comparative value of the authorities has been on the whole accepted as a just one, rather than that which depreciates the value of the Medicean MS. and of the class to which it belongs. On the other hand the conjectural emendations proposed by Stein have very seldom been adopted, and his text has been departed from in a large number of other instances also, which will for the most part be found recorded in the notes.

As it seemed that even after Stein's re-collation of the Medicean MS. there were doubts felt by some scholars as to the true reading in some places of this MS., which is very generally acknowledged to be the most important, I thought it right to examine it myself in all those passages where questions about text arise which concern a translator, that is in nearly five hundred places altogether; and the results, when they are worth observing, are recorded in the notes. At the same time, by the suggestion of Dr. Stein, I re-collated a large part of the third book in the MS. which is commonly referred to as F (i.e. Florentinus), called by Stein C, and I examined this MS. also in a certain number of other places. It should be understood that wherever in the notes I mention the reading of any particular MS. by name, I do so on my own authority.

The notes have been confined to a tolerably small compass. Their purpose is, first, in cases where the text is doubtful, to indicate the reading adopted by the translator and any other which may seem to have reasonable probability, but without discussion of the authorities; secondly, where the rendering is not quite literal (and in other cases where it seemed desirable), to quote the words of the original or to give a more literal version; thirdly, to add an alternative version in cases where there seems to be a doubt as to the true meaning; and lastly, to give occasionally a short explanation, or a reference from one passage of the author to another....