The Heart of Rome 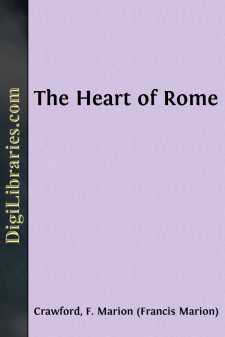 The Baroness Volterra drove to the Palazzo Conti in the heart of Rome at nine o'clock in the morning, to be sure of finding Donna Clementina at home. She had tried twice to telephone, on the previous afternoon, but the central office had answered that "the communication was interrupted." She was very anxious to see Clementina at once, in order to get her support for a new and complicated charity. She only wanted the name, and expected nothing else, for the Conti had very little ready money, though they still lived as if they were rich. This did not matter to their friends, but was a source of constant anxiety to their creditors, and to the good Pompeo Sassi, the steward of the ruined estate. He alone knew what the Conti owed, for none of them knew much about it themselves, though he had done his best to make the state of things clear to them.

The big porter of the palace was sweeping the pavement of the great entrance, as the cab drove in. He wore his working clothes of grey linen with silver buttons bearing the ancient arms of his masters, and his third best gold-laced cap. There was nothing surprising in this, at such an early hour, and as he was a grave man with a long grey beard that made him look very important, the lady who drove up in the open cab did not notice that he was even more solemn than usual. When she appeared, he gave one more glance at the spot he had been sweeping, and then grounded his broom like a musket, folded his hands on the end of the broomstick and looked at her as if he wondered what on earth had brought her to the palace at that moment, and wished that she would take herself off again as soon as possible.

He did not even lift his cap to her, yet there was nothing rude in his manner. He behaved like a man upon whom some one intrudes when he is in great trouble.

The Baroness was rather more exigent in requiring respect from servants than most princesses of the Holy Roman Empire, for her position in the aristocratic scale was not very well defined.

She was not pleased, and spoke with excessive coldness when she asked if Donna Clementina was at home. The porter stood motionless beside the cab, leaning on his broom. After a pause he said in a rather strange voice that Donna Clementina was certainly in, but that he could not tell whether she were awake or not.

"Please find out," answered the Baroness, with impatience. "I am waiting," she added with an indescribable accent of annoyance and surprise, as if she had never been kept waiting before, in all the fifty years of her more or less fashionable life.

There were speaking-tubes in the porter's lodge, communicating with each floor of the great Conti palace, but the porter did not move.

"I cannot go upstairs and leave the door," he said.

"You can speak to the servant through the tube, I suppose!"

The porter slowly shook his massive head, and his long grey beard wagged from side to side.

"There are no servants upstairs," he said. "There is only the family."

"No servants? Are you crazy?"