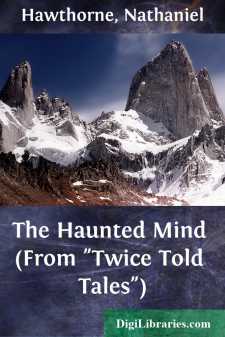 What a singular moment is the first one, when you have hardly begun to recollect yourself after starting from midnight slumber! By unclosing your eyes so suddenly, you seem to have surprised the personages of your dream in full convocation round your bed, and catch one broad glance at them before they can flit into obscurity. Or, to vary the metaphor, you find yourself, for a single instant, wide awake in that realm of illusions, whither sleep has been the passport, and behold its ghostly inhabitants and wondrous scenery, with a perception of their strangeness, such as you never attain while the dream is undisturbed. The distant sound of a church-clock is borne faintly on the wind. You question with yourself, half seriously, whether it has stolen to your waking ear from some gray tower, that stood within the precincts of your dream. While yet in suspense, another clock flings its heavy clang over the slumbering town, with so full and distinct a sound, and such a long murmur in the neighboring air, that you are certain it must proceed from the steeple at the nearest corner. You count the strokes—one—two, and there they cease, with a booming sound, like the gathering of a third stroke within the bell.

If you could choose an hour of wakefulness out of the whole night, it would be this. Since your sober bedtime, at eleven, you have had rest enough to take off the pressure of yesterday's fatigue; while before you, till the sun comes from "far Cathay" to brighten your window, there is almost the space of a summer night; one hour to be spent in thought, with the mind's eye half shut, and two in pleasant dreams, and two in that strangest of enjoyments, the forgetfulness alike of joy and woe. The moment of rising belongs to another period of time, and appears so distant, that the plunge out of a warm bed into the frosty air cannot yet be anticipated with dismay. Yesterday has already vanished among the shadows of the past; to-morrow has not yet emerged from the future. You have found an intermediate space, where the business of life does not intrude; where the passing moment lingers, and becomes truly the present; a spot where Father Time, when he thinks nobody is watching him, sits down by the wayside to take breath. O that he would fall asleep, and let mortals live on without growing older!

Hitherto you have lain perfectly still, because the slightest motion would dissipate the fragments of your slumber. Now, being irrevocably awake, you peep through the half-drawn window-curtain, and observe that the glass is ornamented with fanciful devices in frostwork, and that each pane presents something like a frozen dream. There will be time enough to trace out the analogy, while waiting the summons to breakfast. Seen through the clear portion of the glass, where the silvery mountain-peaks of the frost scenery do not ascend, the most conspicuous object is the steeple, the white spire of which directs you to the wintry lustre of the firmament. You may almost distinguish the figures on the clock that has just told the hour. Such a frosty sky, and the snow-covered roofs, and the long vista of the frozen street, all white, and the distant water hardened into rock, might make you shiver, even under four blankets and a woollen comforter. Yet look at that one glorious star! Its beams are distinguishable from all the rest, and actually cast the shadow of the casement on the bed, with a radiance of deeper hue than moonlight, though not so accurate an outline.

You sink down and muffle your head in the clothes, shivering all the while, but less from bodily chill than the bare idea of a polar atmosphere. It is too cold even for the thoughts to venture abroad. You speculate on the luxury of wearing out a whole existence in bed, like an oyster in its shell, content with the sluggish ecstasy of inaction, and drowsily conscious of nothing but delicious warmth, such as you now feel again. Ah! that idea has brought a hideous one in its train. You think how the dead are lying in their cold shrouds and narrow coffins, through the drear winter of the grave, and cannot persuade your fancy that they neither shrink nor shiver, when the snow is drifting over their little hillocks, and the bitter blast howls against the door of the tomb....