The Greatest Thing In the World and Other Addresses 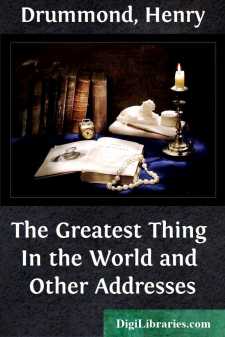 I was staying with a party of friends in a country house during my visit to England in 1884. On Sunday evening as we sat around the fire, they asked me to read and expound some portion of Scripture. Being tired after the services of the day, I told them to ask Henry Drummond, who was one of the party. After some urging he drew a small Testament from his hip pocket, opened it at the 13th chapter of I Corinthians, and began to speak on the subject of Love.

It seemed to me that I had never heard anything so beautiful, and I determined not to rest until I brought Henry Drummond to Northfield to deliver that address. Since then I have requested the principals of my schools to have it read before the students every year. The one great need in our Christian life is love, more love to God and to each other. Would that we could all move into that Love chapter, and live there.

This volume contains, in addition to the address on Love, some other addresses which I trust will bring help and blessing to many.

LOVE: THE GREATEST THING IN THE WORLD.

Every one has asked himself the great question of antiquity as of the modern world: What is the summum bonum—the supreme good? You have life before you. Once only you can live it. What is the noblest object of desire, the supreme gift to covet?

We have been accustomed to be told that the greatest thing in the religious world is Faith. That great word has been the key-note for centuries of the popular religion; and we have easily learned to look upon it as the greatest thing in the world. Well, we are wrong. If we have been told that, we may miss the mark. In the 13th chapter of I Corinthians, Paul takes us to

CHRISTIANITY AT ITS SOURCE;

and there we see, "The greatest of these is love."

It is not an oversight. Paul was speaking of faith just a moment before. He says, "If I have all faith, so that I can remove mountains, and have not love, I am nothing." So far from forgetting, he deliberately contrasts them, "Now abideth Faith, Hope, Love," and without a moment's hesitation the decision falls, "The greatest of these is Love."

And it is not prejudice. A man is apt to recommend to others his own strong point. Love was not Paul's strong point. The observing student can detect a beautiful tenderness growing and ripening all through his character as Paul gets old; but the hand that wrote, "The greatest of these is love," when we meet it first, is stained with blood.

Nor is this letter to the Corinthians peculiar in singling out love as the summum bonum. The masterpieces of Christianity are agreed about it. Peter says, "Above all things have fervent love among yourselves." Above all things. And John goes farther, "God is love."

You remember the profound remark which Paul makes elsewhere, "Love is the fulfilling of the law." Did you ever think what he meant by that? In those days men were working the passage to Heaven by keeping the Ten Commandments, and the hundred and ten other commandments which they had manufactured out of them....