The Gold that Glitters The Mistakes of Jenny Lavender 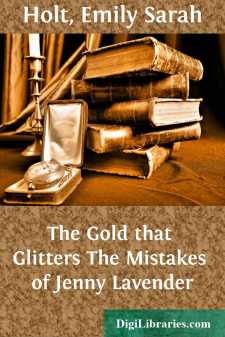 “Jenny, my dear maid, thou wilt never fetch white meal out of a sack of sea-coal.” Jenny tossed her head. It would have been a nice little brown head, if it had not been quite so fond of tossing itself. But Jenny was just sixteen, and laboured under a delusion which besets young folks of that age—namely, that half the brains in the world had got into her head, and very few had been left in her grandmother’s.

“I don’t know what you mean, Grandmother,” said Jenny, as an accompaniment to that toss.

“O Jenny, Jenny! what a shocking thing of you to say, when you knew what your grandmother meant as well as you knew your name was Jane Lavender!”

“I rather think thou dost, my lass,” said old Mrs Lavender quietly.

“Well, I suppose you mean to run down Mr Featherstone,” said Jenny, pouting. “You’re always running him down. And there isn’t a bit of use in it—not with me. I like him, and I always shall. He’s such a gentleman, and always so soft-spoken. But I believe you like that clod-hopper Tom Fenton, ever so much better. I can’t abide him.”

“There’s a deal more of the feather than the stone about Robin Featherstone, lass. If he be a stone, he’s a rolling one. Hasn’t he been in three places since he came here?”

“Yes, because they didn’t use him right in none of ’em. Wanted him to do things out of his place, and such like. Why, at Hampstead Hall, they set him to chop wood.”

“Well, why not?” asked Mrs Lavender, knitting away.

“Because it wasn’t his place,” answered Jenny, indignantly. “It made his hands all rough, and he’s that like a gentleman he couldn’t stand it.”

“Tom Fenton would have done it, I shouldn’t wonder.”

“As if it would have mattered to Tom Fenton, with his great red hands! They couldn’t be no rougher than they are, if he chopped wood while Christmas. Besides, it’s his trade—wood-chopping is. Mr Featherstone’s some’at better nor a carpenter.”

“They’re honest hands, if they are red, Jenny.”

“Scarcely. Anyhow, he’s none in his heart.”

“And his nose turns up!”

“Not as much as thine, Jenny.”

“Mine!” cried Jenny, in angry amazement, “Grandmother, what will you say next? My nose is as straight as—as the church tower.”

“Maybe it is, in general, my lass. But just now thou art turning it up at poor Tom.”

“Well, Jenny, don’t lose thy temper over Tom, or Robin either. Thou’rt like the most of maids—they’ll never heed the experience of old folks. If thou wilt not be ‘ruled by the rudder, thou must be ruled by the rock.’ ‘All is not gold that glitters,’ and I’m afeard thou shalt find it so, poor soul! But I can’t put wisdom into thee; I can only pray the Lord to give it thee. Be thy bags packed up?”