The Ghost-Seer; or the Apparitionist; and Sport of Destiny 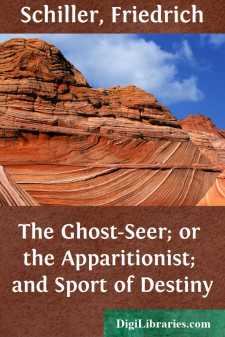 I am about to relate an adventure which to many will appear incredible, but of which I was in great part an eye-witness. The few who are acquainted with a certain political event will, if indeed these pages should happen to find them alive, receive a welcome solution thereof. And, even to the rest of my readers, it will be, perhaps, important as a contribution to the history of the deception and aberrations of the human intellect. The boldness of the schemes which malice is able to contemplate and to carry out must excite astonishment, as must also the means of which it can avail itself to accomplish its aims. Clear, unvarnished truth shall guide my pen; for, when these pages come before the public, I shall be no more, and shall therefore never learn their fate.

On my return to Courland in the year 17—, about the time of the Carnival, I visited the Prince of ——— at Venice. We had been acquainted in the ——— service, and we here renewed an intimacy which, by the restoration of peace, had been interrupted. As I wished to see

the curiosities of this city, and as the prince was waiting only for the arrival of remittances to return to his native country, he easily prevailed on me to tarry till his departure. We agreed not to separate during the time of our residence at Venice, and the prince was kind enough to accommodate me at his lodgings at the Moor Hotel.

As the prince wished to enjoy himself, and his small revenues did not permit him to maintain the dignity of his rank, he lived at Venice in the strictest incognito. Two noblemen, in whom he had entire confidence, and a few faithful servants, composed all his retinue. He shunned expenditure, more however from inclination than economy. He avoided all kinds of dissipation, and up to the age of thirty-five years had resisted the numerous allurements of this voluptuous city. To the charms of the fair sex he was wholly indifferent. A settled gravity and an enthusiastic melancholy were the prominent features of his character. His affections were tranquil, but obstinate to excess. He formed his attachments with caution and timidity, but when once formed they were cordial and permanent. In the midst of a tumultuous crowd he walked in solitude. Wrapped in his own visionary ideas, he was often a stranger to the world about him; and, sensible of his own deficiency in the knowledge of mankind, he scarcely ever ventured an opinion of his own, and was apt to pay an unwarrantable deference to the judgment of others. Though far from being weak, no man was more liable to be governed; but, when conviction had once entered his mind, he became firm and decisive; equally courageous to combat an acknowledged prejudice or to die for a new one.

As he was the third prince of his house, he had no likely prospect of succeeding to the sovereignty. His ambition had never been awakened; his passions had taken another direction. Contented to find himself independent of the will of others, he never enforced his own as a law; his utmost wishes did not soar beyond the peaceful quietude of a private life, free from care....