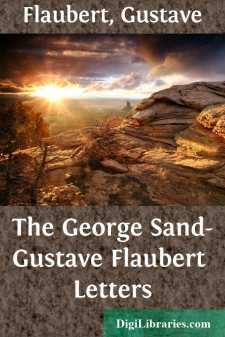 The correspondence of George Sand and Gustave Flaubert, if approached merely as a chapter in the biographies of these heroes of nineteenth century letters, is sufficiently rewarding. In a relationship extending over twelve years, including the trying period of the Franco-Prussian War and the Commune, these extraordinary personalities disclose the aspects of their diverse natures which are best worth the remembrance of posterity. However her passionate and erratic youth may have captivated our grandfathers, George Sand in the mellow autumn of her life is for us at her most attractive phase. The storms and anguish and hazardous adventures that attended the defiant unfolding of her spirit are over. In her final retreat at Nohant, surrounded by her affectionate children and grandchildren, diligently writing, botanizing, bathing in her little river, visited by her friends and undistracted by the fiery lovers of the old time, she shows an unguessed wealth of maternal virtue, swift, comprehending sympathy, fortitude, sunny resignation, and a goodness of heart that has ripened into wisdom. For Flaubert, too, though he was seventeen years her junior, the flamboyance of youth was long since past; in 1862, when the correspondence begins, he was firmly settled, a shy, proud, grumpy toiling hermit of forty, in his family seat at Croisset, beginning his seven years' labor at L'Education Sentimentale, master of his art, hardening in his convictions, and conscious of increasing estrangement from the spirit of his age. He, with his craving for sympathy, and she, with her inexhaustible supply of it, meet; he pours out his bitterness, she her consolation; and so with equal candor of self-revelation they beautifully draw out and strengthen each the other's characteristics, and help one another grow old.

But there is more in these letters than a satisfaction for the biographical appetite, which, indeed, finds ITS account rather in the earlier chapters of the correspondents' history. What impresses us here is the banquet spread for the reflective and critical faculties in this intercourse of natural antagonists. As M. Faguet observes in a striking paragraph of his study of Flaubert:

"It is a curious thing, which does honor to them both, that Flaubert and George Sand should have become loving friends towards the end of their lives. At the beginning, Flaubert might have been looked upon by George Sand as a furious enemy. Emma [Madame Bovary] is George Sand's heroine with all the poetry turned into ridicule. Flaubert seems to say in every page of his work: 'Do you want to know what is the real Valentine, the real Indiana, the real Lelia? Here she is, it is Emma Roualt.' 'And do you want to know what becomes of a woman whose education has consisted in George Sand's books? Here she is, Emma Roualt.' So that the terrible mocker of the bourgeois has written a book which is directly inspired by the spirit of the 1840 bourgeois. Their recriminations against romanticism 'which rehabilitates and poetises the courtesan,' against George Sand, the Muse of Adultery, are to be found in acts and facts in Madame Bovary."

Now, the largest interest of this correspondence depends precisely upon the continuance, beneath an affectionate personal relationship, of a fundamental antagonism of interests and beliefs, resolutely maintained on both sides....