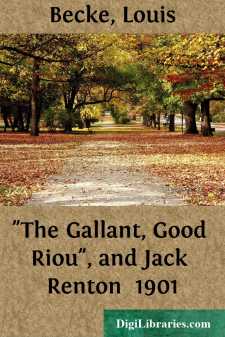 This is a true story of one of Nelson's captains, he of whom Nelson wrote as "the gallant and good Riou"—high meed of praise gloriously won at Copenhagen—but Riou, eleven years before that day, performed a deed, now almost forgotten, which, for unselfish heroism, ranks among the brightest in our brilliant naval annals, and in the sea story of Australia in particular.

In September, 1789, the Guardian, a forty-gun ship, under the command of Riou, then a lieutenant, left England for the one-year-old penal settlement in New South Wales. The little colony was in sore need of food—almost starving, in fact—and Riou's orders were to make all haste to his destination, calling at the Cape on the way to embark live stock and other supplies. All the ship's guns had been removed to make room for the stores, which included a "plant cabin"—a temporary compartment built on deck for the purpose of conveying to Sydney, in pots of earth, trees and plants selected by Sir Joseph Banks as likely to be useful to the young colony—making her deck "a complete garden," says a newspaper of the time. Friends of the officers stationed in New South Wales sent on board the Guardian great quantities of private goods, and these were stored in the gun-room, which it was thought would be a safer place than the hold, but, as the event proved, it was the most insecure.

The ship arrived at the Cape of Good Hope in November, and there filled her decks with cattle and provisions, then sailed again, her cargo being equal in value to about £70,000. On December 23rd—twelve days after leaving the Cape—what is described as "an island of ice" was seen. Riou gave orders to stand towards it in order to renew, by collecting lumps of ice, the supply of water, the stock of fresh water having run very low in consequence of the quantity consumed by the cattle.

The Public Advertiser of April 30, 1790, describes what now happened. As the ship approached the island, the boats were hoisted out and manned, and several lumps collected. During this time the ship lay to, and on the ice being brought on board she attempted to stand away. Very little apprehension was at this time entertained of her safety, although the enormous bulk of the island occasioned an unfavourable current, and in some measure gave a partial direction to the wind. On a sudden, the base of the island, which projected under water considerably beyond the limits of the visible parts, struck the bow of the ship; she instantly swung round, and her head cleared, but her stern, coming on the shoal, struck repeatedly, and the sea being very heavy, her rudder broke away, and all her works abaft were shivered. The ship in this situation became, in a degree, embayed under the terrific bulk of ice, for its height was twice that of the mainmast of a ship of the line, and the prominent head of the berg was every moment expected to break away and overwhelm the ship. At length, after every practicable exertion, she was got off the shoal, and the ice floated past her....