The Future of English Poetry 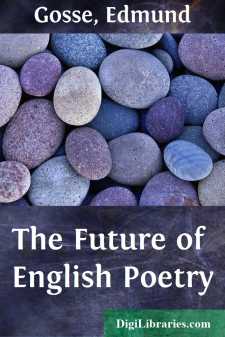 In venturing this afternoon to address an audience accustomed to listen to those whose positive authority is universally recognized, and in taking for my theme a subject not, like theirs, distinct in its definitions or consecrated by tradition and history, I am aware that I perform what you may, if you choose, call an act of blameworthy audacity. My subject is chimerical, vague, and founded on conjectures which you may well believe yourselves at least as well fitted as I am to propound. Nevertheless, and in no rash or paradoxical spirit, I invite you to join with me in some reflections on what is the probable course of English poetry during, let us say, the next hundred years. If I happen to be right, I hope some of the youngest persons present will say, when I am long turned to dust, what an illuminating prophet I was. If I happen to be wrong, why, no one will remember anything at all about the matter. In any case we may possibly be rewarded this afternoon by some agreeable hopes and by the contemplation of some pleasant analogies.

Our title takes for granted that English poetry will continue, with whatever fluctuations, to be a living and abiding thing. This I must suppose that you all accede to, and that you do not look upon poetry as an art which is finished, or the harvest of classic verse as one which is fully reaped and garnered. That has been believed at one time and another, in various parts of the globe. I will mention one instance in the history of our own time: a quarter of a century ago, the practice of writing verse was deliberately abandoned in the literatures of the three Scandinavian countries, but particularly in that of Norway, where no poetry, in our sense, was written from about 1873 to 1885. It almost died out here in England in the middle of the fifteenth century; it ran very low in France at the end of the Middle Ages. But all these instances, whether ancient or modern, of the attempt to prove prose a sufficing medium for all expression of human thought have hitherto failed, and it is now almost certain that they will more and more languidly be revived, and with less and less conviction.

It was at one of the deadliest moments in the life of the art in England that George Gascoigne remarked, in his ‘Epistle to the Reverend Divines’ (1574) that ‘It seemeth unto me that in all ages Poetry hath been not only permitted, but also it hath been thought a right good thing’. Poetry has occupied the purest and the fieriest minds in all ages, and you will remember that Plato, who excluded the poets from his philosophical Utopia, was nevertheless an exquisite writer of lyrical verse himself. So, to come down to our own day, Ibsen, who drove poetry out of the living language of his country, had been one of the most skilful of prosodical proficients....