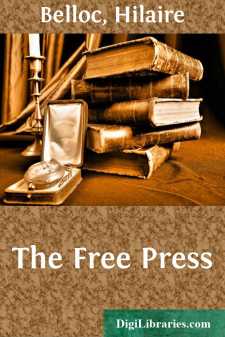 About two hundred years ago a number of things began to appear in Europe which were the fruit of the Renaissance and of the Reformation combined: Two warring twins.

These things appeared first of all in England, because England was the only province of Europe wherein the old Latin tradition ran side by side with the novel effects of protestantism. But for England the great schism and heresy of the sixteenth century, already dissolving to-day, would long ago have died. It would have been confined for some few generations to those outer Northern parts of the Continent which had never really digested but had only received in some mechanical fashion the strong meat of Rome. It would have ceased with, or shortly after, the Thirty Years War.

It was the defection of the English Crown, the immense booty rapidly obtained by a few adventurers, like the Cecils and Russells, and a still smaller number of old families, like the Howards, which put England, with all its profound traditions and with all its organic inheritance of the great European thing, upon the side of the Northern Germanies. It was inevitable, therefore, that in England the fruits should first appear, for here only was there deep soil.

That fruit upon which our modern observation has been most fixed was Capitalism.

Capitalism proceeded from England and from the English Reformation; but it was not fully alive until the early eighteenth century. In the nineteenth it matured.

Another cognate fruit was what to-day we call Finance, that is, the domination of the State by private Capitalists who, taking advantage of the necessities of the State, fix an increasing mortgage upon the State and work perpetually for fluidity, anonymity, and irresponsibility in their arrangements. It was in England, again, that this began and vigorously began with what I think was the first true "National Debt"; a product contemporary in its origins with industrial Capitalism.

Another was that curious and certainly ephemeral vagary of the human mind which has appeared before now in human history, which is called "Sophistry," and which consists in making up "systems" to explain the world; in contrast with Philosophy which aims at the answering of questions, the solution of problems and the final establishment of the truth.

But most interesting of all just now, though but a minor fruit, is the thing called "The Press." It also began to arise contemporaneously with Capitalism and Finance: it has grown with them and served them. It came to the height of its power at the same modern moment as did they.

Let us consider what exactly it means: then we shall the better understand what its development has been.

"The Press" means (for the purpose of such an examination) the dissemination by frequently and regularly printed sheets (commonly daily sheets) of (1) news and (2) suggested ideas.

These two things are quite distinct in character and should be regarded separately, though they merge in this: that false ideas are suggested by false news and especially by news which is false through suppression.

News, that is, information with regard to those things which affect us but which are not within our own immediate view, is necessary to the life of the State.

The obvious, the extremely cheap, the universal means of propagating it, is by word of mouth.

A man has seen a thing; many men have seen a thing. They testify to that thing, and others who have heard them repeat their testimony....