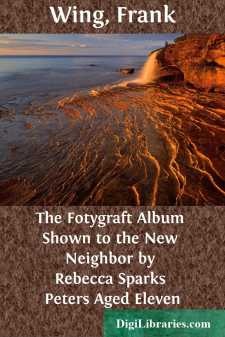 "Why, how d'do, Mrs. Miggs? Come right on in. Ma's jist run over t' Smith's a minute t' borruh some thread and some m'lasses and a couple uh aigs. Aw! yes, come on—she'll be right back. Let's see: S'pose we set on th' sofa and I'll show yuh th' album, so's yuh'll kinda begin t' know some of our folks. We like t' be real neighborly and make new folks feel t' home. There! now we're fixed.

"This here first one's ma when she was little. Ain't she cute? Her Uncle Seth kep' a store up t' Davenport and he give her them furs. Real mink, I think it was.

"That's Aunt Mary Jane Darnell. Her jimpson-weed salve and peach perserves was th' best he ever see, pa says. She couldn't abide a man that primped."

"Here's Ferdinand Ashur Peebles, a favorite cousin of ma's. He ain't got much time fer them 't ain't so good as what he is, so pa don't like him so very well. Says he's a hippercrit. One time ma was showin' this pitchure t' somebody and she says, 'This is a boy we're proud of: Cousin Ferd, full of good works—' 'and prunes,' pa puts in, and it made ma awful mad.

"Them's pa's pa and ma, grampa 'n' gramma Peters. Jist look at her feet! All her folks toes in—even pa, some, but he denies it. Grampa's got a turribul temper. Onct he was up in a tree a-sawin' out limbs and a little branch scratched him onto his head and he turned round quick's a wink, a-snarlin', and bit it right smack off. Fact!"

"That's Sophrony Ann Gowdey, kind of a distant cousin of ma's. She's gifted weth th' secont sight. Onct when grampa lost his false teeth they called her in and she set right here in this room and tranced and after a bit she woke up suddent and says, wild like, 'Seek ye within th' well!' she says; so they done it, but they didn't find 'm. But only a week afterwards, when they cleaned th' cistern, there them teeth was. Pa says, 'Well, anyhow, Phrony knowed they was in th' damp,' he says.

"That's Uncle Mel Burgstresser. Don't he look like Charles Dickens, th' great Scotch poet, though? I think he does, exactly. He's ma's uncle, but he's sich a nice man that even pa likes him. They can't nobody help likin' him, he's so nice; but ever'body laughs at him, he says sich blunderin' things sometimes. Onct when Aunt Alviny (that's his wife) was a-makin' oyster soup, Uncle Mel he come and looked over her shoulder and says, 'Put lots o' water in it, mother, 'cause I'm hungry,' he says.

"That's my cousin, Willie Sparks, same age as me—but not when that pitchure was took. He wasn't only 9 then. Don't he look awful meek? But mebbe you think he ain't got a temper! One time when his pa come home from work after dark and Willie ain't got his chores done, he scolded him, and when Willie brung in th' coal fer th' kitchen stove he was cryin' and he jist hauls off, he's s' mad, and kicks th' stove an awful welt, and says, 'Yuh will burn coal, will yuh!' he says.

"That's ma's cousin, Rebecca, and her man, took th' day they was married. Him and her quarreled somethin' awful, she gener'ly havin' th' upper hand. I was named after her."

"That there's Peletiah Parrett, a friend of pa's since they was boys. He's a singin' school teacher and he's been to our house lots of times, but he lives at Ohio....