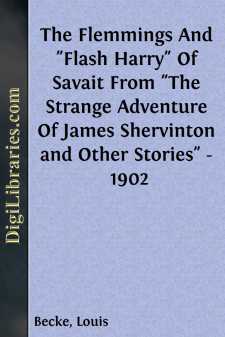 On a certain island in the Paumotu Group, known on the charts as Chain Island, but called Anaa by the people themselves, lived a white man named Martin Flemming, one of those restless wanderers who range the Pacific in search of the fortune they always mean to gain, but which never comes to them, except in some few instances—so few that they might be counted on one's fingers.

Two years had come and gone since Flemming had landed on the island with his wife, family, and two native servants, and settled down as a resident trader at the large and populous village of Tuuhora, where he soon gained the respect and confidence—if not the friendship—of the Anaa people, one of the proudest, most self-reliant, and brave of any of the Polynesian race, or their offshoots. For though he was a keen business man, he was just and honest in all his transactions, never erring, as so many traders do, on the side of mistaken generosity, but yet evincing a certain amount of liberality when the occasion justified it—and the natives knew that when he told them that tobacco, or biscuit, or rice, or gunpowder had risen in price in Tahiti or New Zealand, and that he would also be compelled to raise his charges, they knew that his statement was true—that he was a man above trickery, either in his business or his social relations with them, and would not descend to a lie for the sake of gain.

Flemming, at this time, was about forty years of age; his wife, who was an intelligent Hawaiian Islander, was ten years his junior, and the mother of his three half-caste children—a boy of thirteen, another of ten, and a girl of six. Such education as he could give them during his continuous wanderings over the North and South Pacific had been but scanty; for he was often away on trading cruises, and his wife, though she could read and write, like all Hawaiian women, was not competent to instruct her children, though in all other respects she was everything that a mother should be, except, as Flemming would often tell her, she was too indulgent and too ready to gratify their whims and fancies. However, they were now not so much under her control, for soon after coming to the island, he found that one of the three Marist Brothers living at the mission was able to, and willing to give them a few hours' instruction several times a week. For this, Flemming, who was really anxious about his children's welfare, made a liberal payment to the Mission, and the arrangement had worked very satisfactorily—Father Billot, who was a good English scholar, giving them their lessons in that language.

I must now make mention of the remaining persons constituting the trader's household—the two servants—one a man about thirty years of age, the other not more than eighteen or nineteen. They were both natives of Arorai (Hurd Island), one of the Eingsmill Group, and situated something less than three degrees south of the Equator. They had both taken service with him on their own island six years previously, and had followed his and his family's fortunes ever since, for they were both devotedly attached to the children; and when, a year after he had settled on their island, misfortune befell him through the destruction of his trading station by fire, and he found himself a ruined man, they refused to leave him, and declared they would work for him without payment until he was again in a position to begin trading—no matter how long it might be ere that took place....