The Farm That Won't Wear Out 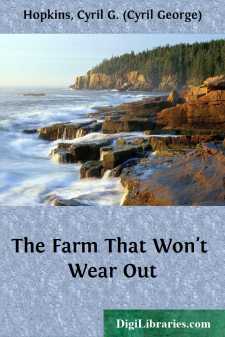 CHAPTER I WHAT GOES TO MAKE UP PERMANENT FERTILITY

IT IS an old saying that "any fool can farm," and this was almost the truth when farming consisted chiefly in reducing the fertility of new, rich land secured at practically no cost from a generous Government. But to restore depleted soils to high productive power in economic systems is no fool's job, for it requires mental as well as muscular energy; and no apologies should be expected from those who necessarily make use of technical terms in the discussion of this technical subject, notwithstanding the common foolish advice that farmers should be given a sort of "parrot" instruction in almost baby language instead of established facts and principles in definite and permanent scientific terms. The farmer should be as familiar with the names of the ten essential elements of plant food as he is with the names of his ten nearest neighbors. Safe and permanent systems of soil improvement and preservation may come with intelligence—never with ignorance—on the part of the landowners.

When the knowledge becomes general that food for plants is just as necessary as food for animals, then American agriculture will mean more than merely working the land for all that's in it. This knowledge is as well established as the fact that the earth is round, although the people are relatively few who understand or make intelligent application of the existing information.

Agricultural plants consist of ten elements, known as the essential elements of plant food; and not a kernel of corn or a grain of wheat, not a leaf of clover or a spear of grass can be produced if the plant fails to secure any one of these ten elements. Some of these are supplied to plants in abundance by natural processes; others are not so provided and must be supplied by the farmer, or his land becomes impoverished and unproductive.

Foods That Plants Live On

Two elements, carbon and oxygen, are contained in normal air in the form of a gas called carbon dioxid, and this compound is taken into the plant through the breathing pores, which are microscopic openings located chiefly on the under side of the leaves. Some plants have more than a hundred thousand breathing pores to the square inch of leaf surface.

When plants or plant products are burned or decomposed the carbon of the combustible material—grass, wood, coal, and so forth—unites with the free oxygen of the atmosphere to re-form the carbon dioxid, which thus returns as a gas to the air. Even the food taken into the animal system, after being digested and carried into the blood, is brought, into contact with the oxygen of the air—which also passes into the blood through the cell walls of the lungs—and a form of combustion takes place, the heat generated serving to warm the body while the carbon dioxid passes back into the lungs and is exhaled into the open air.

By these circulation processes the supply of carbon dioxid in the atmosphere is renewed and maintained without any special effort on the part of man....