The Faith Doctor A Story of New York 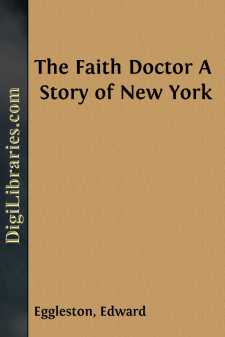 Though there is no life that I know more intimately and none that I have known for so long a period as that of New York, the present story is the first in which I have essayed to depict phases of the complex society of the metropolis. I use the word society in its general, not in its narrow sense, for in no country has the merely "society novel" less reason for being than in ours.

The prevailing interest in mind-cure, faith-cure, Christian science, and other sorts of aërial therapeutics has supplied a motive for this story, and it is only proper that I should feel a certain gratitude to the advocates of the new philosophy. But the primary purpose of this novel is artistic, not polemical. The book was not written to depreciate anybody's valued delusions, but to make a study of human nature under certain modern conditions. In one age men cure diseases by potable gold and strengthen their faith by a belief in witches, in another they substitute animal magnetism and adventism. Within the memory of those of us who are not yet old, the religious fervor of millenarianism and the imitation science of curative mesmerism gave way to spirit-rappings and clairvoyant medical treatment. Now spiritism in all its forms is passing into decay, only to leave the field free to mind-doctors and faith-healers. There is nothing for it but to wait for the middle ages to pass; when modern times arrive, there will be more criticism and less credulity, let us hope.

The propositions put into the mouth of Miss Bowyer, though they sound like burlesque, are taken almost verbatim from the writings of those who claim to be expounders of Christian science. While Miss Bowyer was drawn more closely from an original than is usual in fictitious writing, I am well aware that there are professors of Christian science much superior to her. There are, indeed, souls who are the victims of their own generous enthusiasm; and it grieves me that, in treating the subject with fidelity and artistic truthfulness, I must give pain to many of the best—to some whose friendship I hold dear.

For the idea of a novel on the present theme I am indebted to an unpublished short story entitled An Irregular Practitioner, by Miss Anne Steger Winston, which came under my eye three or four years ago. I secured the transfer to me of Miss Winston's rights in the subject, and, though I have not followed the lines of her story, it gives me pleasure to acknowledge my obligation to her for the suggestion of a motive without which this novel would not have had existence.

For the comfort of the reader, let me add that the name Phillida should be accented on the first syllable, and pronounced with the second vowel short.