The Expressman and the Detective 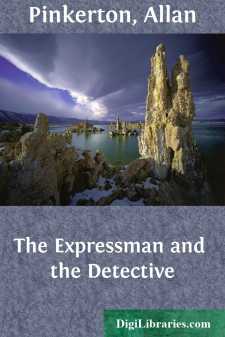 Montgomery, Alabama, is beautifully situated on the Alabama river, near the centre of the State. Its situation at the head of navigation, on the Alabama river, its connection by rail with important points, and the rich agricultural country with which it is surrounded, make it a great commercial centre, and the second city in the State as regards wealth and population. It is the capital, and consequently learned men and great politicians flock to it, giving it a society of the highest rank, and making it the social centre of the State.

From 1858 to 1860, the time of which I treat in the present work, the South was in a most prosperous condition. "Cotton was king," and millions of dollars were poured into the country for its purchase, and a fair share of this money found its way to Montgomery.

When the Alabama planters had gathered their crops of cotton, tobacco, rice, etc., they sent them to Montgomery to be sold, and placed the proceeds on deposit in its banks. During their busy season, while overseeing the labor of their slaves, they were almost entirely debarred from the society of any but their own families; but when the crops were gathered they went with their families to Montgomery, where they gave themselves up to enjoyment, spending their money in a most lavish manner.

There were several good hotels in the city and they were always filled to overflowing with the wealth and beauty of the South.

The Adams Express Company had a monopoly of the express business of the South, and had established its agencies at all points with which there was communication by rail, steam or stage. They handled all the money sent to the South for the purchase of produce, or remitted to the North in payment of merchandise. Moreover, as they did all the express business for the banks, besides moving an immense amount of freight, it is evident that their business was enormous.

At all points of importance, where there were diverging routes of communication, the company had established principal agencies, at which all through freight and the money pouches were delivered by the messengers. The agents at these points were selected with the greatest care, and were always considered men above reproach. Montgomery being a great centre of trade was made the western terminus of one of the express routes, Atlanta being the eastern. The messengers who had charge of the express matter between these two points were each provided with a safe and with a pouch. The latter was to contain only such packages as were to go over the whole route, consisting of money or other valuables. The messenger was not furnished with a key to the pouch, but it was handed to him locked by the agent at one end of the route to be delivered in the same condition to the agent at the other end.

The safe was intended for way packages, and of it the messenger of course had a key. The pouch was carried in the safe, each being protected by a lock of peculiar construction.

The Montgomery office in 1858, and for some years previous, had been in charge of Nathan Maroney, and he had made himself one of the most popular agents in the company's employ.

He was married, and with his wife and one daughter, had pleasant quarters at the Exchange Hotel, one of the best houses in the city. He possessed all the qualifications which make a popular man. He had a genial, hearty manner, which endeared him to the open, hospitable inhabitants of Montgomery, so that he was "hail fellow, well met," with most of its populace. He possessed great executive ability and hence managed the affairs of his office in a very satisfactory manner....