The Essays of Arthur Schopenhauer; On Human Nature 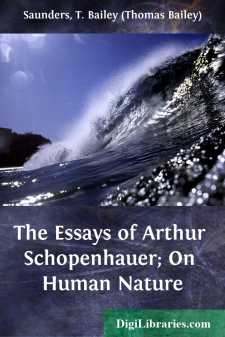 For example, if we could establish the truth of what up till now is only a conjecture, namely, that it is the action of the sun which produces thermoelectricity at the equator; that this produces terrestrial magnetism; and that this magnetism, again, is the cause of the aurora borealis, these would be truths externally of great, but internally of little, significance. On the other hand, examples of internal significance are furnished by all great and true philosophical systems; by the catastrophe of every good tragedy; nay, even by the observation of human conduct in the extreme manifestations of its morality and immorality, of its good and its evil character. For all these are expressions of that reality which takes outward shape as the world, and which, in the highest stages of its objectivation, proclaims its innermost nature.

To say that the world has only a physical and not a moral significance is the greatest and most pernicious of all errors, the fundamental blunder, the real perversity of mind and temper; and, at bottom, it is doubtless the tendency which faith personifies as Anti-Christ. Nevertheless, in spite of all religions—and they are systems which one and all maintain the opposite, and seek to establish it in their mythical way—this fundamental error never becomes quite extinct, but raises its head from time to time afresh, until universal indignation compels it to hide itself once more.

Yet, however certain we may feel of the moral significance of life and the world, to explain and illustrate it, and to resolve the contradiction between this significance and the world as it is, form a task of great difficulty; so great, indeed, as to make it possible that it has remained for me to exhibit the true and only genuine and sound basis of morality everywhere and at all times effective, together with the results to which it leads. The actual facts of morality are too much on my side for me to fear that my theory can ever be replaced or upset by any other.

However, so long as even my ethical system continues to be ignored by the professorial world, it is Kant's moral principle that prevails in the universities. Among its various forms the one which is most in favour at present is "the dignity of man." I have already exposed the absurdity of this doctrine in my treatise on the Foundation of Morality.[1] Therefore I will only say here that if the question were asked on what the alleged dignity of man rests, it would not be long before the answer was made that it rests upon his morality. In other words, his morality rests upon his dignity, and his dignity rests upon his morality.

But apart from this circular argument it seems to me that the idea of dignity can be applied only in an ironical sense to a being whose will is so sinful, whose intellect is so limited, whose body is so weak and perishable as man's....