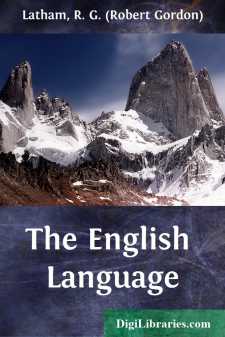 But besides this, it was well known that the current grammarians, and the critical philologists, had long ceased to write alike upon the English, or indeed upon any other, language. For this reason the sphere of the work became enlarged; so that, on many occasions, general principles had to be enounced, fresh terms to be defined, and old classifications to be remodelled. This introduced extraneous elements of criticism, and points of discussion which, in a more advanced stage of English philology, would have been superfluous. It also introduced elements which had a tendency to displace the account of some of the more special and proper details of the language. There was not room for the exposition of general principles, for the introduction of the necessary amount of preliminary considerations, and for the minuti? of an extreme analysis. Nor is there room for all this at present. A work that should, at one and the same time, prove its principles, instead of assuming them, supply the full and necessary preliminaries in the way of logic, phonetics, and ethnology, and, besides this, give a history of every variety in the form of every word, although, perhaps, a work that one man might write, would be a full and perfect Thesaurus of the English Language, and, would probably extend to many volumes. For, in the English language, there are many first principles to be established, and much historical knowledge to be applied. Besides which, the particular points both of etymology and syntax are far more numerous than is imagined. Scanty as is the amount of declension and conjugation in current use, there are to be found in every department of our grammars, numerous isolated words which exhibit the fragments of a fuller inflection, and of a more highly developed etymology. This is well-known to every scholar who has not only viewed our language as a derivative of the Anglo-Saxon, and observed that there are similar relations between many other languages (e. g. the Italian and Latin, the German and M?so-Gothic, &c.), but who has, also, generalized the phenomena of such forms of relationship and derivation, and enabled himself to see in the most uninflected languages of the nineteenth century, the fragments of a fuller and more systematic inflection, altered by time, but altered in a uniform and a general manner.

The point, however, upon which, in the prefaces both of the first edition of the present work and of his English Grammar, the writer has most urgently insisted is the disciplinal character of grammatical studies in general, combined with the fact, that the grammatical study of one's own language is almost exclusively disciplinal. It is undoubtedly true, that in schools something that is called English Grammar is taught: and it is taught pretty generally. It is taught so generally that, I believe, here are only two classes of English boys and girls who escape it—those who are taught nothing at all in any school whatever, and those who are sent so early to the great classical schools (where nothing is taught but Latin and Greek), as to escape altogether the English part of their scholastic education. But what is it that is thus generally taught? not the familiar practice of speaking English—that has been already attained by the simple fact of the pupil having been born on English soil, and of English parents. Not the scientific theory of the language—that is an impossibility with the existing text-books. Neither, then, of these matters is taught. Nevertheless labour is expended, and time is consumed. What is taught? Something undoubtedly. The facts, that language is more or less regular (i. e. capable of having its structure exhibited by rules); that there is such a thing as grammar; and that certain expressions should be avoided, are all matters worth knowing. And they are all taught even by the worst method of teaching. But are these the proper objects of systematic teaching? Is the importance of their acquisition equivalent to the time, the trouble, and the displacement of more valuable subjects, which are involved in their explanation? I think not. Gross vulgarity of language is a fault to be prevented; but the proper prevention is to be got from habit—not rules. The proprieties of the English language are to be learned, like the proprieties of English manners, by conversation and intercourse; and the proper school for both, is the best society in which the learner is placed. If this be good, systematic teaching is superfluous; if bad, insufficient. There are undoubted points where a young person may doubt as to the grammatical propriety of a certain expression. In this case let him ask some one older, and more instructed. Grammar, as an art, is, undoubtedly, the art of speaking and writing correctly—but then, as an art, it is only required for foreign languages. For our own we have the necessary practice and familiarity.

The claim of English grammar to form part and parcel of an English education stands or falls with the value of the philological and historical knowledge to which grammatical studies may serve as an introduction, and with the value of scientific grammar as a disciplinal study. I have no fear of being supposed to undervalue its importance in this respect. Indeed in assuming that it is very great, I also assume that wherever grammar is studied as grammar, the language which the grammar so studied should represent, must be the mother-tongue of the student; whatever that mother-tongue may be—English for Englishmen, Welsh for Welshmen, French for Frenchmen, German for Germans, &c....