The Dramatic Works of John Dryden, Volume 1 With a Life of the Author 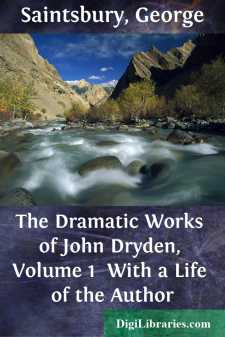 [Prefaced to Edition issued in 1808, edited by Sir Walter Scott.]

After the lapse of more than a century since the author's death, the Works of Dryden are now, for the first time, presented to the public in a complete and uniform edition. In collecting the pieces of one of our most eminent English classics,—one who may claim at least the third place in that honoured list, and who has given proofs of greater versatility of talent than either Shakespeare or Milton, though justly placed inferior to them in their peculiar provinces,—the Editor did not feel himself entitled to reject any part of his writings; even of those which reflect little honour on the age, by whose taste they were dictated. Had a selection been permitted, he would have excluded several of the Comedies, and some part of the Translations: but this is a liberty which has not lately been indulged to editors of classical poetry. Literary history is an important step in that of man himself; and the unseductive coarseness of Dryden is rather a beacon than a temptation.

In commencing this task, the Editor had hopes of friendly assistance, which might have rendered his toil more easy, and the result more accurate. Deprived of this by a concurrence of unlucky circumstances, he has both to dread the imperfection of his labours, and the consequence of perhaps an over-zeal to render his edition complete. In the first respect, although he has many thanks to return for information readily afforded, it has sometimes been received after the irrevocable operations of the printer had taken place.[1] On the second point, he may have been too lavish in historical notes, and entered too deeply into the secret history of the persons and times to which Dryden's satirical poems refer. But he has endeavoured to avail himself of all information, so soon as communicated, whether corrective or corroborative of his prior opinions; and the wish, not only to render intelligible, blanks, allusions, and feigned names, but to present, if possible, the very spirit and political character of Dryden's contemporaries, must be the excuse for intruding a few pages of political history and personal anecdote; which, after all, they, whose memory does not require such refreshment, may easily dispense with reading. In this last part of his task, the Editor has been greatly assisted by free access to a valuable collection of the fugitive pieces of the reigns of Charles II., James II., William III., and Queen Anne. This curious collection was made by Narcissus Luttrell, Esq., under whose name the Editor usually quotes it The industrious collector seems to have bought every poetical tract, of whatever merit, which was hawked through the streets in his time, marking carefully the price and date of the purchase. His collection contains the earliest editions of many of our most excellent poems, bound up, according to the order of time, with the lowest trash of Grub Street. It was dispersed on Mr. Luttrell's death; but a number of the volumes, referring chiefly to the latter part of Charles the Second's reign, have fortunately become the property of Mr....