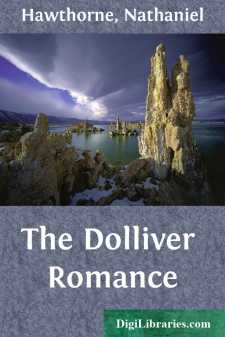 In "The Dolliver Romance," only three chapters of which the author lived to complete, we get an intimation as to what would have been the ultimate form given to that romance founded on the Elixir of Life, for which "Septimius Felton" was the preliminary study. Having abandoned this study, and apparently forsaken the whole scheme in 1862, Hawthorne was moved to renew his meditation upon it in the following year; and as the plan of the romance had now seemingly developed to his satisfaction, he listened to the publisher's proposal that it should begin its course as a serial story in the "Atlantic Monthly" for January, 1864—the first instance in which he had attempted such a mode of publication.

But the change from England to Massachusetts had been marked by, and had perhaps in part caused, a decline in his health. Illness in his family, the depressing and harrowing effect of the Civil War upon his sensibilities, and anxiety with regard to pecuniary affairs, all combined to make still further inroads upon his vitality; and so early as the autumn of 1862 Mrs. Hawthorne noted in her private diary that her husband was looking "miserably ill." At no time since boyhood had he suffered any serious sickness, and his strong constitution enabled him to rally from this first attack; but the gradual decline continued. After sending forth "Our Old Home," he had little strength for any employment more arduous than reading, or than walking his accustomed path among the pines and sweetfern on the hill behind The Wayside, known to his family as the Mount of Vision. The projected work, therefore, advanced but slowly. He wrote to Mr. Fields:—

"I don't see much probability of my having the first chapter of the Romance ready so soon as you want it. There are two or three chapters ready to be written, but I am not yet robust enough to begin, and I feel as if I should never carry it through."

The presentiment proved to be only too well founded. He had previously written:—

"There is something preternatural in my reluctance to begin. I linger at the threshold, and have a perception of very disagreeable phantasms to be encountered if I enter. I wish God had given me the faculty of writing a sunshiny book."

And again, in November, he says: "I foresee that there is little probability of my getting the first chapter ready by the 15th, although I have a resolute purpose to write it by the end of the month." He did indeed send it by that time, but it began to be apparent in January that he could not go on.

"Seriously," he says, in one letter, "my mind has, for the present, lost its temper and its fine edge, and I have an instinct that I had better keep quiet. Perhaps I shall have a new spirit of vigor if I wait quietly for it; perhaps not." In another: "I hardly know what to say to the public about this abortive Romance, though I know pretty well what the case will be. I shall never finish it…. I cannot finish it unless a great change comes over me; and if I make too great an effort to do so, it will be my death."

Finally, work had to be given over indefinitely....