The Doctor's Dilemma: Preface on Doctors 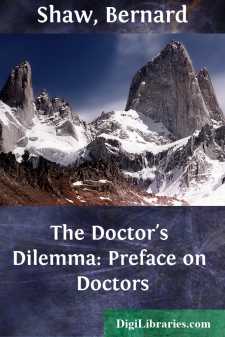 It is not the fault of our doctors that the medical service of the community, as at present provided for, is a murderous absurdity. That any sane nation, having observed that you could provide for the supply of bread by giving bakers a pecuniary interest in baking for you, should go on to give a surgeon a pecuniary interest in cutting off your leg, is enough to make one despair of political humanity. But that is precisely what we have done. And the more appalling the mutilation, the more the mutilator is paid. He who corrects the ingrowing toe-nail receives a few shillings: he who cuts your inside out receives hundreds of guineas, except when he does it to a poor person for practice.

Scandalized voices murmur that these operations are unnecessary. They may be. It may also be necessary to hang a man or pull down a house. But we take good care not to make the hangman and the housebreaker the judges of that. If we did, no man's neck would be safe and no man's house stable. But we do make the doctor the judge, and fine him anything from sixpence to several hundred guineas if he decides in our favor. I cannot knock my shins severely without forcing on some surgeon the difficult question, "Could I not make a better use of a pocketful of guineas than this man is making of his leg? Could he not write as well—or even better—on one leg than on two? And the guineas would make all the difference in the world to me just now. My wife—my pretty ones—the leg may mortify—it is always safer to operate—he will be well in a fortnight—artificial legs are now so well made that they are really better than natural ones—evolution is towards motors and leglessness, etc., etc., etc."

Now there is no calculation that an engineer can make as to the behavior of a girder under a strain, or an astronomer as to the recurrence of a comet, more certain than the calculation that under such circumstances we shall be dismembered unnecessarily in all directions by surgeons who believe the operations to be necessary solely because they want to perform them. The process metaphorically called bleeding the rich man is performed not only metaphorically but literally every day by surgeons who are quite as honest as most of us. After all, what harm is there in it? The surgeon need not take off the rich man's (or woman's) leg or arm: he can remove the appendix or the uvula, and leave the patient none the worse after a fortnight or so in bed, whilst the nurse, the general practitioner, the apothecary, and the surgeon will be the better.

Again I hear the voices indignantly muttering old phrases about the high character of a noble profession and the honor and conscience of its members. I must reply that the medical profession has not a high character: it has an infamous character. I do not know a single thoughtful and well-informed person who does not feel that the tragedy of illness at present is that it delivers you helplessly into the hands of a profession which you deeply mistrust, because it not only advocates and practises the most revolting cruelties in the pursuit of knowledge, and justifies them on grounds which would equally justify practising the same cruelties on yourself or your children, or burning down London to test a patent fire extinguisher, but, when it has shocked the public, tries to reassure it with lies of breath-bereaving brazenness. That is the character the medical profession has got just now. It may be deserved or it may not: there it is at all events, and the doctors who have not realized this are living in a fool's paradise. As to the humor and conscience of doctors, they have as much as any other class of men, no more and no less....