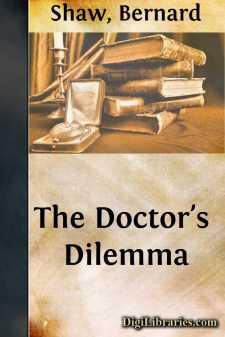 On the 15th June 1903, in the early forenoon, a medical student, surname Redpenny, Christian name unknown and of no importance, sits at work in a doctor's consulting-room. He devils for the doctor by answering his letters, acting as his domestic laboratory assistant, and making himself indispensable generally, in return for unspecified advantages involved by intimate intercourse with a leader of his profession, and amounting to an informal apprenticeship and a temporary affiliation. Redpenny is not proud, and will do anything he is asked without reservation of his personal dignity if he is asked in a fellow-creaturely way. He is a wide-open-eyed, ready, credulous, friendly, hasty youth, with his hair and clothes in reluctant transition from the untidy boy to the tidy doctor.

Redpenny is interrupted by the entrance of an old serving-woman who has never known the cares, the preoccupations, the responsibilities, jealousies, and anxieties of personal beauty. She has the complexion of a never-washed gypsy, incurable by any detergent; and she has, not a regular beard and moustaches, which could at least be trimmed and waxed into a masculine presentableness, but a whole crop of small beards and moustaches, mostly springing from moles all over her face. She carries a duster and toddles about meddlesomely, spying out dust so diligently that whilst she is flicking off one speck she is already looking elsewhere for another. In conversation she has the same trick, hardly ever looking at the person she is addressing except when she is excited. She has only one manner, and that is the manner of an old family nurse to a child just after it has learnt to walk. She has used her ugliness to secure indulgences unattainable by Cleopatra or Fair Rosamund, and has the further great advantage over them that age increases her qualification instead of impairing it. Being an industrious, agreeable, and popular old soul, she is a walking sermon on the vanity of feminine prettiness. Just as Redpenny has no discovered Christian name, she has no discovered surname, and is known throughout the doctors' quarter between Cavendish Square and the Marylebone Road simply as Emmy.

The consulting-room has two windows looking on Queen Anne Street. Between the two is a marble-topped console, with haunched gilt legs ending in sphinx claws. The huge pier-glass which surmounts it is mostly disabled from reflection by elaborate painting on its surface of palms, ferns, lilies, tulips, and sunflowers. The adjoining wall contains the fireplace, with two arm-chairs before it. As we happen to face the corner we see nothing of the other two walls. On the right of the fireplace, or rather on the right of any person facing the fireplace, is the door. On its left is the writing-table at which Redpenny sits. It is an untidy table with a microscope, several test tubes, and a spirit lamp standing up through its litter of papers. There is a couch in the middle of the room, at right angles to the console, and parallel to the fireplace....