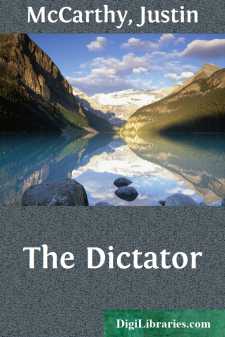 AN EXILE IN LONDON

The May sunlight streamed in through the window, making curious patterns of the curtains upon the carpet. Outside, the tide of life was flowing fast; the green leaves of the Park were already offering agreeable shade to early strollers; the noise of cabs and omnibuses had set in steadily for the day. Outside, Knightsbridge was awake and active; inside, sleep reigned with quiet. The room was one of the best bedrooms in Paulo's Hotel; it was really tastefully furnished, soberly decorated, in the style of the fifteenth French Louis. A very good copy of Watteau was over the mantel-piece, the only picture in the room. There had been a fire in the hearth overnight, for a grey ash lay there. Outside on the ample balcony stood a laurel in a big blue pot, an emblematic tribute on Paulo's part to honourable defeat which might yet turn to victory.

There were books about the room: a volume of Napoleon's maxims, a French novel, a little volume of Sophocles in its original Greek. A uniform-case and a sword-case stood in a corner. A map of South America lay partially unrolled upon a chair. The dainty gilt clock over the mantel-piece, a genuine heritage from the age of Louis Quinze, struck eight briskly. The Dictator stirred in his sleep.

Presently there was a tapping at the door to the left of the bed, a door communicating with the Dictator's private sitting-room. Still the Dictator slept, undisturbed by the slight sound. The sound was not repeated, but the door was softly opened, and a young man put his head into the room and looked at the slumbering Dictator. The young man was dark, smooth-shaven, with a look of quiet alertness in his face. He seemed to be about thirty years of age. His dark eyes watched the sleeping figure affectionately for a few seconds. 'It seems a pity to wake him,' he muttered; and he was about to draw his head back and close the door, when the Dictator stirred again, and suddenly waking swung himself round in the bed and faced his visitor. The visitor smiled pleasantly. 'Buenos dias, Escelencia,' he said.

The Dictator propped himself up on his left arm and looked at him.

'Good morning, Hamilton,' he answered. 'What's the good of talking Spanish here? Better fall back upon simple Saxon until we can see the sun rise again in Gloria. And as for the Excellency, don't you think we had better drop that too?'

'Until we see the sun rise in Gloria,' said Hamilton. He had pushed the door open now, and entered the room, leaning carelessly against the door-post. 'Yes; that may not be so far off, please Heaven; and, in the meantime, I think we had better stick to the title and all forms, Excellency.'

The Dictator laughed again. 'Very well, as you please. The world is governed by form and title, and I suppose such dignities lend a decency even to exile in men's eyes. Is it late? I was tired, and slept like a dog.'

'Oh no; it's not late,' Hamilton answered. 'Only just struck eight. You wished to be called, or I shouldn't have disturbed you.'