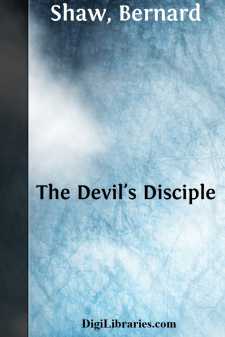 At the most wretched hour between a black night and a wintry morning in the year 1777, Mrs. Dudgeon, of New Hampshire, is sitting up in the kitchen and general dwelling room of her farm house on the outskirts of the town of Websterbridge. She is not a prepossessing woman. No woman looks her best after sitting up all night; and Mrs. Dudgeon's face, even at its best, is grimly trenched by the channels into which the barren forms and observances of a dead Puritanism can pen a bitter temper and a fierce pride. She is an elderly matron who has worked hard and got nothing by it except dominion and detestation in her sordid home, and an unquestioned reputation for piety and respectability among her neighbors, to whom drink and debauchery are still so much more tempting than religion and rectitude, that they conceive goodness simply as self-denial. This conception is easily extended to others—denial, and finally generalized as covering anything disagreeable. So Mrs. Dudgeon, being exceedingly disagreeable, is held to be exceedingly good. Short of flat felony, she enjoys complete license except for amiable weaknesses of any sort, and is consequently, without knowing it, the most licentious woman in the parish on the strength of never having broken the seventh commandment or missed a Sunday at the Presbyterian church.

The year 1777 is the one in which the passions roused of the breaking off of the American colonies from England, more by their own weight than their own will, boiled up to shooting point, the shooting being idealized to the English mind as suppression of rebellion and maintenance of British dominion, and to the American as defence of liberty, resistance to tyranny, and selfsacrifice on the altar of the Rights of Man. Into the merits of these idealizations it is not here necessary to inquire: suffice it to say, without prejudice, that they have convinced both Americans and English that the most high minded course for them to pursue is to kill as many of one another as possible, and that military operations to that end are in full swing, morally supported by confident requests from the clergy of both sides for the blessing of God on their arms.

Under such circumstances many other women besides this disagreeable Mrs. Dudgeon find themselves sitting up all night waiting for news. Like her, too, they fall asleep towards morning at the risk of nodding themselves into the kitchen fire. Mrs. Dudgeon sleeps with a shawl over her head, and her feet on a broad fender of iron laths, the step of the domestic altar of the fireplace, with its huge hobs and boiler, and its hinged arm above the smoky mantel-shelf for roasting. The plain kitchen table is opposite the fire, at her elbow, with a candle on it in a tin sconce. Her chair, like all the others in the room, is uncushioned and unpainted; but as it has a round railed back and a seat conventionally moulded to the sitter's curves, it is comparatively a chair of state. The room has three doors, one on the same side as the fireplace, near the corner, leading to the best bedroom; one, at the opposite end of the opposite wall, leading to the scullery and washhouse; and the house door, with its latch, heavy lock, and clumsy wooden bar, in the front wall, between the window in its middle and the corner next the bedroom door....