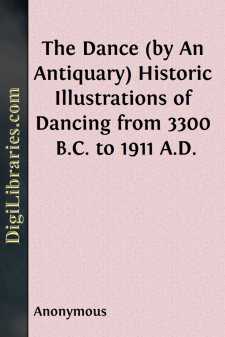 CHAPTER I. Egyptian, Assyrian, Hebrew, and Phoenician Dancing. The Ritual Dance of Egypt. Dancing Examples from Tomb of Ur-ari-en-Ptah, 6th Dynasty, British Museum. Description of Dancing from Sir G. Wilkinson; of the Egyptian Pipes and Hieroglyphics of Dancing, &c. Phoenician Round Dances, from a Limestone Group found at Cyprus, and Bronze Patera from Idalium, Cyprus.

In this work it is not necessary to worry the reader with speculations as to the origin of dancing. There are other authorities easily accessible who have written upon this theme.

Dancing is probably one of the oldest arts. As soon as man was man he without doubt began to gesticulate with face, body, and limbs. How long it took to develop bodily gesticulation into an art no one can guess—perhaps a millennium.

In writing of dancing, one will therefore include those gesticulations or movements of the body suggesting an idea, whether it be the slow movement of marching, or the rapid gallop, even some of the movements that we commonly call acrobatic. It is not intended here to include the more sensual movements of the East and the debased antique.

Generally the antique dances were connected with a religious ritual conceived to be acceptable to the Gods. This connection between dancing and religious rites was common up to the 16th century. It still continues in some countries.

In some of the earliest designs which have come down to us the dancers moved, as stars, hand in hand round an altar, or person, representing the sun; either in a slow or stately method, or with rapid trained gestures, according to the ritual performed.

Dancing, music and poetry were inseparable. Dancing is the poetry of motion, and its connection with music, as the poetry of sound, occurs at all times. In our own day musical themes are marked by forms originally dance times, as waltz time, gavotte time, minuet time, etc.

Fig. 2: Greek figures in a solemn dance. From a vase at Berlin.

Amongst the earliest representations that are comprehensible, we have certain Egyptian paintings, and some of these exhibit postures that evidently had even then a settled meaning, and were a phrase in the sentences of the art. Not only were they settled at such an early period (B.C. 3000, fig. 1) but they appear to have been accepted and handed down to succeeding generations (fig. 2), and what is remarkable in some countries, even to our own times. The accompanying illustrations from Egypt and Greece exhibit what was evidently a traditional attitude. The hand-in-hand dance is another of these.

The earliest accompaniments to dancing appear to have been the clapping of hands, the pipes,[] the guitar, the tambourine, the castanets, the cymbals, the tambour, and sometimes in the street, the drum.

The following account of Egyptian dancing is from Sir Gardiner Wilkinson's "Ancient Egypt"[]:—

Fig. 3: The hieroglyphics describe the dance.

"The dance consisted mostly of a succession of figures, in which the performers endeavoured to exhibit a great variety of gesture....