The Cycle of Spring 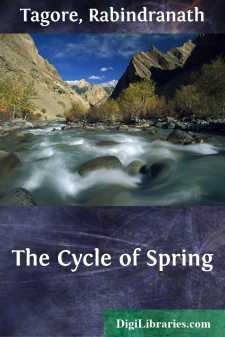 Characters of the Prelude

The stage is on two levels: the higher, at the back, for the Song-preludes alone, concealed by a purple curtain; the lower only being discovered when the drop goes up. Diagonally across the extreme left of the lower stage, is arranged the king's court, with various platforms, for the various dignitaries ascending to the canopied throne. The body of the stage is left free for the "Play" when that develops.

[The names of the speakers are not given in the margin, as they can easily be guessed.]

What is the matter?

The King is in great distress.

Who is that over there, playing on his flute?

Why? What's the matter?

The King is greatly disturbed.

What are those wild children doing, making so much noise?

They are the Mandal family.

Then tell the Mandal family to keep their children quiet.

Where can that Vizier have gone to?

Here I am. What's the matter?

Haven't you heard the news?

The King is greatly troubled in his mind.

Well, I've got some very important news about the frontier war.

War we may have, but not the news.

Then the Chinese Ambassador is waiting to see His Majesty.

Let him wait. Anyhow he can't see the King.

If it please Your Majesty, it is time to go to the Court.

Time to go? Yes, time to go, but not to the Court.

What does Your Majesty mean?

Haven't you heard? The bell has just been rung to dismiss the Court.

When? What bell? We haven't heard any bell.

How could you hear? They have rung it in my ears alone.

Oh, Sire. No one can have had the impertinence to do that.

Vizier! They are ringing it now.

Pardon me, Sire, if I am very stupid; but I cannot understand.

Can't you see there's a bell-ringer there?

Oh, Your Majesty. Are you playing a joke?

The joke is not mine, but His, who has got the whole world by the ear, and is having His jest. Last night, when the Queen was putting a garland of jasmines round my neck, she cried out with alarm, "King, what is this? Here are two grey hairs behind your ear."

Oh, please, Sire, don't worry so much about a little thing like that. Why! The royal physician——

Vizier! The founder of our dynasty had his royal physician, too. But what could he do? Death has left his card of invitation behind my ear. The Queen wanted, then and there, to pluck out the grey hairs. But I said, "Queen, what's the use? You may remove Death's invitation, but can you remove Death, the Inviter?" So, for the present——

Yes, Sire, for the present, let us attend to business.

Business, Vizier! I have no time for business. Send for the Pundit. Send for Sruti-bhushan.

But, Sire, the General——