The Cords of Vanity A Comedy of Shirking 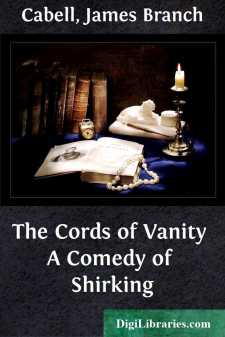 Mr. Cabell, in making ready this second or intended edition of THE CORDS OF VANITY, performs an act of reclamation which is at the same time an act of fresh creation.

For the purely reclamatory aspect of what he has done, his reward (so far as that can consist in anything save the doing) must come from insignificantly few directions; so few indeed that he, with a wrily humorous exaggeration, affects to believe them singular. The author of this novel has been pleased to describe the author of this introduction as "the only known purchaser of the book" and, further, as "the other person to own a CORDS OF VANITY". I could readily enough acquit myself, with good sound legal proofs, of any such singularity as stands charged in this soft impeachment—and that without appeal to The Cleveland Plain Dealer of eleven years ago ("slushy and disgusting"), or to The New York Post ("sterile and malodorous … worse than immoral—dull"), or to Ainslee's Magazine ("inconsequent and rambling … rather nauseating at times"). These devotees of the adjective that hunts in pairs are hardly to be discussed, I suppose, in connection with any rewards except such as accrue to the possessors of a certain obtuseness, who always and infallibly reap at least the reward of not being hurt by what they do not know—or, for that matter, by what they do know. He who writes such a book as THE CORDS OF VANITY is committing himself to the supremely irrational faith that this dullness is somehow not the ultimate arbiter; and for him the pronouncements of this dullness simply do not figure among either his rewards or his penalties. So, it is not exactly to these tributes of the press that one reverts in noting that THE CORDS OF VANITY, on its publication eleven years ago, promptly became a book which there were—almost—none to praise and very few to love. After all, its author's computation of that former audience of his—his actual individual voluntary readers of a decade ago—appears to be but slightly and pardonably exaggerated on the more modest side of the fact. If there were a Cabell Club of membership determined solely by the number of those who, already possessing THE CORDS OF VANITY in its first edition, recognize it as the work of a serious artist of high achievement and higher capacity, I suspect that the smallness of that club would be in inordinate disproportion to everything but its selectness and its members' pride in "belonging".

Be that as it may, the economist-author, on the eve of his book's emergence from the limbo of "out of print", prefers that it come into its redemption carrying a foreword by someone who knew it without dislike in its former incarnation. No contingent liability, it seems, can dissuade Mr. Cabell from this preference. An author who once elected to precede a group of his best tales with an introduction eloquently setting forth reasons why the collection ought not to be published at all, is hardly to be deterred now by the mere inexpediency of hitching his star to a farm-wagon....