The Conflict between Private Monopoly and Good Citizenship 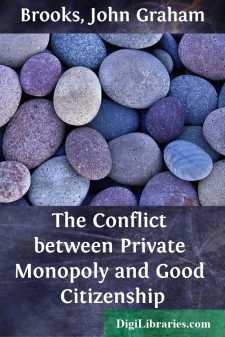 For a special purpose, I have had occasion to examine with care the comments upon American life and institutions made by foreign critics during the period that extends from the later part of the eighteenth century up to the present time. If one puts aside the frivolous and ill-tempered studies and considers alone the fairer and more competent observers, the least pleasant of all the criticisms is that we are essentially a lawless people.

If the critic, like de Tocqueville and Miss Martineau, had sympathy and admiration for us, the revealed lawlessness came as an astonishment, because it seemed to upset all sorts of pretty theories about democracy. The doctrinaires had worked out to perfection the idea that a people who could freely make and unmake their own laws would, for that plain reason, respect the laws. Of course, a people who had laws thrust upon them from above would hate them and disobey them. But a democracy would escape this temptation.

It was apparently an amusement of many of these writers to collect, as did the jaunty author of "Peter Simple" in his Diary, interminable pages from our own press to illustrate the general contempt for those laws which really interfered with pleasures or economic interests. Harriet Martineau drove through Boston on the day when Garrison was being dragged through the streets. The flame of her indignation burned high; but it burned with new heat when she found that the very best of Boston culture and respectability would not lift a finger or pay a copper to have the law enforced in Mr. Garrison's favor. Beacon Street and Harvard professors told her that the victim was a disreputable agitator, richly deserving what he got. They seemed to think this English lady very cranky and unreasonable. The mob had the entire sympathy of the best people in the community, and that should satisfy her. De Tocqueville had an awakening at a polling-booth in Pennsylvania that in the same way disturbed all his presuppositions about us.

It is not my purpose to bristle up and strike back at these critics of American behavior. Amid possible exaggeration, they are telling a great deal of truth about us. It is a truth that it has its own natural history. A long adventurous border-life was in some respects the great fact of the nineteenth century in moulding our national habits. A large part of the population lived under conditions where no appeal to legal restraints was possible. There were no courts,—no police. The whole constructive work of life was thrown so absolutely upon the man fighting his life-battle alone, that excessive individualistic habits were formed. Every self-reliant instinct was developed until it became a law unto itself. They do not, says de Tocqueville of the Americans, ask help. They do not "appeal." They understand that everything rests with themselves. Every immigrant of those days had come from what Freeman calls "overgoverned" countries. They escaped from highly organized social constraints to have their fling on a continent as illimitable in extent as it was in the prizes which its natural resources offered. That such a large proportion of the strong lived this free border-life through the entire century has resulted in making a standard of individualistic action almost dominant in the community.

There is, first, this natural history of extreme individualistic habits and of their reactions on our whole national life. There is, further, the almost universal concentration on wealth-production as a means of winning what average men most crave in this world....