The Complete Essays of John Galsworthy 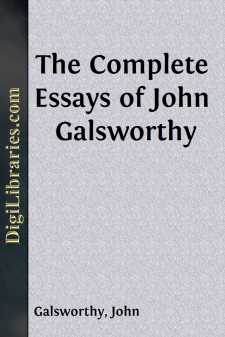 THE INN OF TRANQUILLITY

Under a burning blue sky, among the pine-trees and junipers, the cypresses and olives of that Odyssean coast, we came one afternoon on a pink house bearing the legend: "Osteria di Tranquillita,"; and, partly because of the name, and partly because we did not expect to find a house at all in those goat-haunted groves above the waves, we tarried for contemplation. To the familiar simplicity of that Italian building there were not lacking signs of a certain spiritual change, for out of the olive-grove which grew to its very doors a skittle-alley had been formed, and two baby cypress-trees were cut into the effigies of a cock and hen. The song of a gramophone, too, was breaking forth into the air, as it were the presiding voice of a high and cosmopolitan mind. And, lost in admiration, we became conscious of the odour of a full-flavoured cigar. Yes—in the skittle-alley a gentleman was standing who wore a bowler hat, a bright brown suit, pink tie, and very yellow boots. His head was round, his cheeks fat and well-coloured, his lips red and full under a black moustache, and he was regarding us through very thick and half-closed eyelids.

Perceiving him to be the proprietor of the high and cosmopolitan mind, we accosted him.

"Good-day!" he replied: "I spik English. Been in Amurrica yes."

"You have a lovely place here."

Sweeping a glance over the skittle-alley, he sent forth a long puff of smoke; then, turning to my companion (of the politer sex) with the air of one who has made himself perfect master of a foreign tongue, he smiled, and spoke.

"Precisely; the name of your inn, perhaps, suggests——"

"I change all that—soon I call it Anglo-American hotel."

He closed one eye and smiled.

Having passed a few more compliments, we saluted and walked on; and, coming presently to the edge of the cliff, lay down on the thyme and the crumbled leaf-dust. All the small singing birds had long been shot and eaten; there came to us no sound but that of the waves swimming in on a gentle south wind. The wanton creatures seemed stretching out white arms to the land, flying desperately from a sea of such stupendous serenity; and over their bare shoulders their hair floated back, pale in the sunshine. If the air was void of sound, it was full of scent—that delicious and enlivening perfume of mingled gum, and herbs, and sweet wood being burned somewhere a long way off; and a silky, golden warmth slanted on to us through the olives and umbrella pines. Large wine-red violets were growing near. On such a cliff might Theocritus have lain, spinning his songs; on that divine sea Odysseus should have passed. And we felt that presently the goat-god must put his head forth from behind a rock.

It seemed a little queer that our friend in the bowler hat should move and breathe within one short flight of a cuckoo from this home of Pan. One could not but at first feelingly remember the old Boer saying: "O God, what things man sees when he goes out without a gun!" But soon the infinite incongruity of this juxtaposition began to produce within one a curious eagerness, a sort of half-philosophical delight....