The Cities of Refuge: or, The Name of Jesus A Sunday book for the young 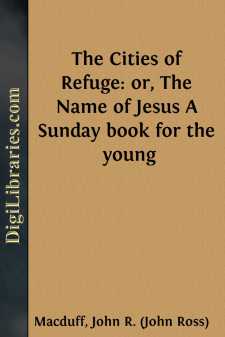 When travelling lately through the Simplon—one of the great Alpine passes leading from Switzerland into Italy—I observed, close by the roadside, at regular distances, a number of plain, square buildings. On these (sometimes over the doorway, sometimes on the side) were inscribed the words—“Refuge No. 1,” “Refuge No. 2,” “Refuge No. 3,” &c. I think there were twenty altogether. I was told, on inquiry, they were intended as shelters for any hapless travellers who might be overtaken by the sudden storms which so often sweep down from the snow-white mountains bounding the prospect. These “Refuges,” at the time I saw them, were empty, for it was in the beginning of summer, when everything, even in that elevated region, was looking bright and green. The Alpine rhododendron was flushing, with its pink blossom, the mountain sides; or growing up, along with the lovely blue gentian, close by stray patches of winter's snow which were still filling the ridges and hollows in the higher parts of the pass. Seldom at this season are travellers exposed to any peril from an Alpine storm. It is different, however, in winter or spring, when the avalanches come tumbling from the heights, or the snow is drifting in huge masses over that wonderful Road. Many shivering wayfarers have fled with thankful hearts into these shelters. Some have been carried thither, in a state of insensibility, by unknown benefactors, and on gradually awaking to consciousness, have blessed the kind hearts and hands which have saved them from certain death, and are now ministering to their necessities. By others, alas! they have been reached too late. Rescued from the snows of the mountain, they have been conveyed to them only to die.

As I passed those Alpine “Retreats,” I could not help being reminded of the wonderful Cities of Refuge which God graciously provided of old in Palestine for the unfortunate manslayer.

It sometimes happened, in the land of Canaan, as in our own country, that a Hebrew, without any evil purpose, would cause the death of a brother Hebrew. He did not intend to inflict any injury; it was the result only of unhappy accident. But, nevertheless, to show God's detestation of the shedding of blood, he was liable, by the Levitical law, to be killed by the Avenger, or “Goel,”—the person nearest related to the murdered man. If he wished to escape with his life, his only chance of safety was to flee to one of these Refuge-cities. It mattered not what his age, or name, or station in life was. He might be young or old, prince or noble, priest or prophet, he was exposed every moment to death, unless he availed himself of the offered shelter. There was no time for delay, he must betake himself to instant flight. To linger might be to perish.

Do you not think with pity of the unhappy fugitive, obliged thus suddenly to leave his home and all he most loved on earth? If at the time he caused the death, he was working in his vineyard, the pruning-hook must be left to rust on the branch. If he was ploughing with his yoke of oxen, they must be left lowing in the furrow. If he was busied in his harvest-field, the sheaves must be left unbound, and the reapers receive their wages from another's hands. If he was returning home fatigued at evening after the toils of the day, and longing for grateful repose, he dare give no “sleep to his eyes, nor slumber to his eye-lids.” His child may be lying pining in sickness at his cottage, but it may endanger him to return to clasp that and his other little ones in his embrace, and bid them a fond farewell. He may have no time to alter his raiment or take even his scrip or pilgrim-staff. The Avenger of blood may be in the adjoining street, or in the dwelling hard by. Another hour may be fatal;—“Skin for skin, all that a man hath will he give for his life.” Off he speeds in breathless haste—now along the level road—now up the steep ascent—with his breast heaving, and drops of perspiration standing on his brow. Friends may meet him, but with a wave of the hand, and shouting “Goel! Goel!” he rushes on with fleet footstep. Parched with thirst in the hot noonday, he turns a longing eye on the ripe grapes that are hanging in purple clusters on the wayside, or on the water trickling down the narrow ravine. But he dare not pause. Knowing full well that the Avenger is in close pursuit, he hurries on with unabated ardor. Happy sight, when he sees at last, on some mountain slope, the longed-for shelter! Happy, when, weary and footsore, covered with dust, the portals of the city close him in. A few moments before, had he been overtaken on the mountain-top by his pursuer, he might have been heard to cry out, in the bitterness of despair, “Hast thou found me, O mine enemy?” Now, safe within the secure shelter, he can rejoicingly exclaim, even with the Avenger standing close by, “O thou enemy, destructions are come to a perpetual end.”

These Cities of Refuge form one of the Old Testament PICTURES of the sinner, and of the coming gospel salvation....