The Child of the Dawn 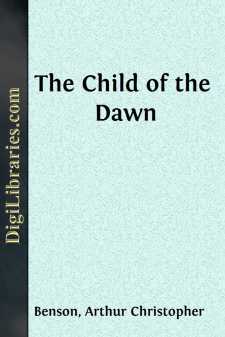 I think that a book like the following, which deals with a subject so great and so mysterious as our hope of immortality, by means of an allegory or fantasy, needs a few words of preface, in order to clear away at the outset any misunderstandings which may possibly arise in a reader's mind. Nothing is further from my wish than to attempt any philosophical or ontological exposition of what is hidden behind the veil of death. But one may be permitted to deal with the subject imaginatively or poetically, to translate hopes into visions, as I have tried to do.

The fact that underlies the book is this: that in the course of a very sad and strange experience—an illness which lasted for some two years, involving me in a dark cloud of dejection—I came to believe practically, instead of merely theoretically, in the personal immortality of the human soul. I was conscious, during the whole time, that though the physical machinery of the nerves was out of gear, the soul and the mind remained, not only intact, but practically unaffected by the disease, imprisoned, like a bird in a cage, but perfectly free in themselves, and uninjured by the bodily weakness which enveloped them. This was not all. I was led to perceive that I had been living life with an entirely distorted standard of values; I had been ambitious, covetous, eager for comfort and respect, absorbed in trivial dreams and childish fancies. I saw, in the course of my illness, that what really mattered to the soul was the relation in which it stood to other souls; that affection was the native air of the spirit; and that anything which distracted the heart from the duty of love was a kind of bodily delusion, and simply hindered the spirit in its pilgrimage.

It is easy to learn this, to attain to a sense of certainty about it, and yet to be unable to put it into practice as simply and frankly as one desires to do! The body grows strong again and reasserts itself; but the blessed consciousness of a great possibility apprehended and grasped remains.

There came to me, too, a sense that one of the saddest effects of what is practically a widespread disbelief in immortality, which affects many people who would nominally disclaim it, is that we think of the soul after death as a thing so altered as to be practically unrecognisable—as a meek and pious emanation, without qualities or aims or passions or traits—as a sort of amiable and weak-kneed sacristan in the temple of God; and this is the unhappy result of our so often making religion a pursuit apart from life—an occupation, not an atmosphere; so that it seems impious to think of the departed spirit as interested in anything but a vague species of liturgical exercise.

I read the other day the account of the death-bed of a great statesman, which was written from what I may call a somewhat clerical point of view. It was recorded with much gusto that the dying politician took no interest in his schemes of government and cares of State, but found perpetual solace in the repetition of childish hymns....