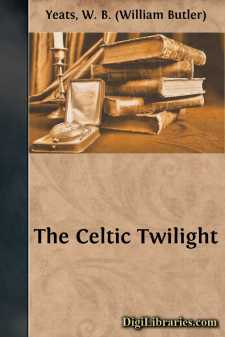 I have desired, like every artist, to create a little world out of the beautiful, pleasant, and significant things of this marred and clumsy world, and to show in a vision something of the face of Ireland to any of my own people who would look where I bid them. I have therefore written down accurately and candidly much that I have heard and seen, and, except by way of commentary, nothing that I have merely imagined. I have, however, been at no pains to separate my own beliefs from those of the peasantry, but have rather let my men and women, dhouls and faeries, go their way unoffended or defended by any argument of mine. The things a man has heard and seen are threads of life, and if he pull them carefully from the confused distaff of memory, any who will can weave them into whatever garments of belief please them best. I too have woven my garment like another, but I shall try to keep warm in it, and shall be well content if it do not unbecome me.

Hope and Memory have one daughter and her name is Art, and she has built her dwelling far from the desperate field where men hang out their garments upon forked boughs to be banners of battle. O beloved daughter of Hope and Memory, be with me for a little.

I have added a few more chapters in the manner of the old ones, and would have added others, but one loses, as one grows older, something of the lightness of one's dreams; one begins to take life up in both hands, and to care more for the fruit than the flower, and that is no great loss per haps. In these new chapters, as in the old ones, I have invented nothing but my comments and one or two deceitful sentences that may keep some poor story-teller's commerce with the devil and his angels, or the like, from being known among his neighbours. I shall publish in a little while a big book about the commonwealth of faery, and shall try to make it systematical and learned enough to buy pardon for this handful of dreams.

W. B. YEATS. A TELLER OF TALES

Many of the tales in this book were told me by one Paddy Flynn, a little bright-eyed old man, who lived in a leaky and one-roomed cabin in the village of Ballisodare, which is, he was wont to say, "the most gentle"вЂ”whereby he meant faeryвЂ”"place in the whole of County Sligo." Others hold it, however, but second to Drumcliff and Drumahair. The first time I saw him he was cooking mushrooms for himself; the next time he was asleep under a hedge, smiling in his sleep. He was indeed always cheerful, though I thought I could see in his eyes (swift as the eyes of a rabbit, when they peered out of their wrinkled holes) a melancholy which was well-nigh a portion of their joy; the visionary melancholy of purely instinctive natures and of all animals.

And yet there was much in his life to depress him, for in the triple solitude of age, eccentricity, and deafness, he went about much pestered by children. It was for this very reason perhaps that he ever recommended mirth and hopefulness. He was fond, for instance, of telling how Collumcille cheered up his mother....