The Casque's Lark or Victoria, The Mother of The Camps 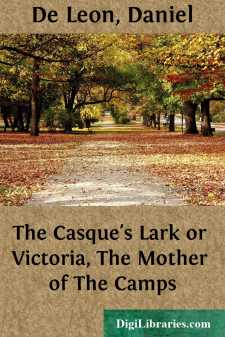 I, Schanvoch, a descendant of Joel, the brenn of the tribe of Karnak; I, Schanvoch, now a freeman, thanks to the valor of my father Ralf and the bold Gallic insurrections that continued unabated from century to century; I, Schanvoch, write the following narrative two hundred and sixty-four years after my ancestress Genevieve, the wife of Fergan, witnessed in Judea the death of the poor carpenter Jesus of Nazareth.

I write the following account thirty-four years after Gomer, the son of Judicaël and grandson of Fergan, who was a slave like his father and grandfather, wrote to his son Mederik that he had nothing to add to the family annals but the monotonous account of his life as a slave.

Neither did my ancestor Mederik contribute aught to our family history, and his son Justin contented himself with having a stranger's hand enter these short lines:

"My father Mederik died a slave, fighting as a Son of the Mistletoe for the freedom of Gaul; he told me that he was driven to revolt against the foreign oppression by the narrative of the bravery of our free ancestors and by the description of the sufferance of our enslaved fathers. I, his son Justin, a colonist, and no longer a slave of the fisc, have caused this fact to be entered upon our family parchments, which I shall faithfully transmit to my son Aurel, together with their accompanying emblems, the gold sickle, the little brass bell, the fragment of the iron collar and the little silver cross, all of which I have carefully preserved."

Aurel, Justin's son and a colonist like his father, was not any more literate than the latter, and left no record whatever. After him, again a stranger's hand inserted these lines in our family annals:

"Ralf, the son of Aurel the colonist, fought for the freedom of his country. Ralf having become absolutely free, thanks to the Gallic arms and the holy war preached by our venerable druids, found himself obliged to resort to a friend's help in order to enter the death of his father Aurel upon our family parchments. Happier than myself, my son Schanvoch will not be forced to avail himself of a stranger in order to enter in our family's archives the death of myself, the first male descendant of Joel, the brenn of the tribe of Karnak, who again regained complete freedom. As several of my ancestors have done before me, I here declare that it was the history of our ancestors' valor and martyrdom that induced me to take up arms against the Romans, our masters and secular oppressors."

These family scrolls, together with their accompanying relics, I shall leave to you, my dear little Alguen, the son of my beloved wife Ellen, who gave you birth this day four years ago.

I choose this day, the anniversary of your birth, as a day of happy augury, in order to start, for your benefit and the benefit of our descendants, the narrative of my life and my battles, my joys and my sorrows, obedient to the last wishes of our ancestor Joel, the brenn of the tribe of Karnak.

You will grieve, my son, when you learn from these archives that, from the death of Joel down to that of my great-grandfather Justin, seven generations, aye, seven whole generations, were subjected to intolerable slavery. But your heart will be cheered when you learn that my great-grandfather had, from a slave, become a colonist or serf attached to the glebe of Gaul—still a servile condition but greatly above that of slavery. My own father, having regained his full freedom, thanks to the formidable insurrections of the Sons of the Mistletoe that from century to century were conjured up at the voice of the druids, the tireless and heroic defenders of the freedom of oppressed Gaul, has bequeathed to me freedom, that most precious of all wealth. I shall, in turn, transmit it to you.

By dint of constantly struggling for it, and also of stubborn resistance, we Gauls have succeeded in successively reconquering almost our full former freedom. A last and frail bond still holds us to Rome, now our ally, after having formerly been our pitiless master. When that last and frail bond will be snapped, we shall have regained our absolute independence, and we shall resume our former place at the head of the great nations of the world.

Before acquainting you with the details of my life and time, my son, I must fill certain voids that are left in the history of our family through the omissions of those of our ancestors, who, either through illiteracy or the hardness of the times, were prevented from joining their respective accounts to our archives....