The Carlovingian Coins Or The Daughters of Charlemagne. A Tale of the Ninth Century 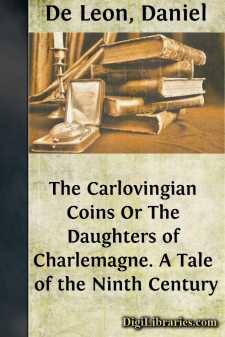 CHAPTER I. AMAEL AND VORTIGERN.

Towards the commencement of the month of November of the year 811, a numerous cavalcade was one afternoon wending its way to the city of Aix-la-Chapelle, the capital of the Empire of Charles the Great—an Empire that had been so rapidly increased by rapidly succeeding conquests over Germany, Saxony, Bavaria, Bohemia, Hungary, Italy and Spain, that Gaul, as formerly during the days of the Roman Emperors, was again but a province among the vast domains. The ambitious designs of Charles Martel had been realized. Childeric, the last scion of the Merovingian dynasty, had been got rid of. Martel's descendants took his seat, and now the Hammerer's grandson wielded the sceptre of Clovis over an immensely wider territory.

Eight or ten cavalry soldiers rode in advance of the cavalcade. A little apart from the smaller escort, four cavaliers ambled leisurely. Two of them wore brilliant armor after the German fashion. One of these was accompanied by a venerable old man of a martial and open countenance. His long beard, snow white as his hair that was half hidden under a fur cap, fell over his chest. He wore a Gallic blouse of grey wool, held around his waist by a belt, from which hung a long sword with an iron hilt. His ample hose of rough white fabric reached slightly below his knees and left exposed his tightly laced leather leggings, that ended in his boots whose heels were armed with spurs. The old man was Amael, who under the assumed Frankish name of Berthoald had, eighty years before, saved the life of Charles Martel at the battle of Poitiers against the Arabs, had declined the post offered him by Charles, as jailer of the last descendant of Clovis, and, finally, smitten by conscience, had renounced wealth and dignity under the Frankish enslavers of Gaul, and returned to his people and country of Brittany, or Armorica, as the Romans named it. Amael now touched his hundredth year. His great age and his somewhat portly stature notwithstanding, he still looked full of vigor. He handled with dexterity the black horse that he rode and whose spirit seemed no wise abated by the long road it had traveled. From time to time, Amael turned round upon his saddle in order to cast a look of paternal solicitude upon his grandson Vortigern, a lad of hardly eighteen years, who was accompanied by the other of the two Frankish warriors. The face of Vortigern, of exceptional beauty for a man, was framed in long chestnut ringlets, that, escaping from his scarlet coif, tumbled down below a chin that was as dainty as a woman's. His large blue eyes, fringed with lashes black as his bold arched eyebrows, had an air at once ingenuous and resolute. His red lips, shaded by the down of adolescence, revealed at every smile two rows of teeth white as enamel. A slightly aquiline nose, a fresh and pure complexion somewhat tanned by the sun, completed the harmonious make-up of the youth's charming visage. His clothes, made after the fashion of his grandfather's, differed from them only in a touch of elegance that bespoke a mother's hand, tenderly proud of her son's comely appearance. Accordingly, the blue blouse of the lad was ornamented around the neck, over the shoulders and at the extremities of the sleeves with embroideries of white wool, while a calfskin belt, from which hung a sword with polished hilt, encircled his supple waist. His linen hose half hid his deerskin leggings, that were tightly laced to his nervy limbs and rejoined his boots, made of tanned skin and equipped with large copper spurs that glistened like gold. Although his right arm was held in a scarf of some black material, Vortigern handled his horse with his left hand with as much ease as skill. For traveling companion he had a young warrior of agreeable mien, bold and mercurial, alert and frolicsome. The mobility of his face recalled in nothing the stolidity of the German. His name was Octave. Roman by birth, in appearance and character, his inexhaustible Southern wit often succeeded in unwrinkling the brow of his young companion. The latter, however, would soon again relapse into a sort of silent and somber revery. Thus for some time absorbed in sadness, he walked his horse slowly, when Octave broke in gaily in a tone of friendly reproach:

"By Bacchus! You still are preoccupied and silent."

"Come now; you should, on the contrary, chase away, such saddening thoughts....