The Captain of the Gray-Horse Troop 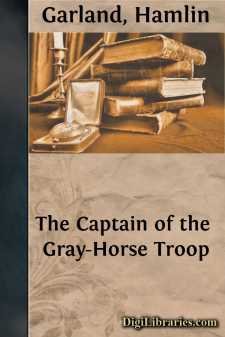 A CAMP IN THE SNOW

Winter in the upper heights of the Bear Tooth Range is a glittering desolation of snow with a flaming blue sky above. Nothing moves, nothing utters a sound, save the cony at the mouth of the spiral shaft, which sinks to his deeply buried den in the rocks. The peaks are like marble domes, set high in the pathway of the sun by day and thrust amid the stars by night. The firs seem hopeless under their ever-increasing burdens. The streams are silenced—only the wind is abroad in the waste, the tireless, pitiless wind, fanged like ingratitude, insatiate as fire.

But it is beautiful, nevertheless, especially of a clear dawn, when the shadows are vividly purple and each rime-wreathed summit is smit with ethereal fire, and each eastern slope is resplendent as a high-way of powdered diamonds—or at sunset, when the high crests of the range stand like flaming mile-stones leading to the Celestial City, and the lakes are like pools of pure gold caught in a robe of green velvet. Yet always this land demands youth and strength in its explorer.

King Frost's dominion was already complete over all the crests, over timber-line, when young Captain Curtis set out to cross the divide which lay between Lake Congar and Fort Sherman—a trip to test the virtue of a Sibley tent and the staying qualities of a mountain horse.

Bennett, the hairy trapper at the head of the lake, advised against it. "The snow is soft—I reckon you better wait a week."

But Curtis was a seasoned mountaineer and took pride in assaulting the stern barrier. "Besides, my leave of absence is nearly up," he said to the trapper.

"Well, you're the doctor," the old trapper replied. "Good luck to ye, Cap."

It was sunrise of a crisp, clear autumn morning when they started, and around them the ground was still bare, but by noon they were wallowing mid-leg deep in new-fallen snow. Curtis led the way on foot—his own horse having been packed to relieve the burdens of the others—while Sergeant Pierce, resolute and uncomplaining, brought up the rear.

"We must camp beside the sulphur spring to-night," Curtis said, as they left timber-line and entered upon the bleak, wind-swept slopes of Grizzly Bear.

"Very well, sir," Pierce cheerily replied, and till three o'clock they climbed steadily towards the far-off glacial heights, the drifts ever deepening, the cold ever intensifying. They had eaten no food since dawn, and the horses were weak with hunger and weariness as they topped the divide and looked down upon the vast eastern slope. The world before them seemed even more inhospitable and wind-swept than the land they had left below them to the west. The air was filled with flying frost, the sun was weak and pale, and the plain was only a pale-blue sea far, far below to the northeast. The wind blew through the pass with terrible force, and the cold nipped every limb like a famishing white wolf.

"There is the sulphur spring, sir," said Pierce, pointing towards a delicate strand of steam which rose from a clump of pines in the second basin beneath them....