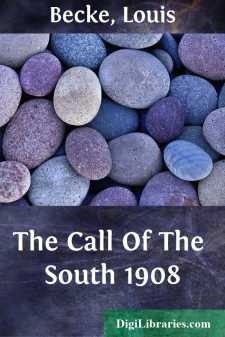 CHAPTER I ~ PAUL, THE DIVER

"Guess I'm getting round," and the big, bronzed-faced man raised his eyes to mine as he lay under the awning on the after deck of his pearling lugger. I sat down beside him and began to talk.

A mile away the white beach of a little, land-locked bay shimmered under the morning sun, and the drooping fronds of the cocos hung listless and silent, waiting for the rising of the south-east trade.

"Paul," I said, "it is very hot here. Come on shore with me to the native village, where it is cooler, and I will make you a big drink of lime-juice."

I helped him to rise—for he was weak from a bad attack of New Guinea fever—and two of our native crew assisted him over the side into my whaleboat. A quarter of an hour later we were seated on mats under the shade of a great wild mango tree, drinking lime-juice and listening to the lazy hum of the surf upon the reef, and the soft croo, croo of many "crested" pigeons in the branches above.

The place was a little bay in Callie Harbour on Admiralty Island in the South Pacific; and Paul Fremont was one of our European divers. I was in charge of the supply schooner which was tender to our fleet of pearling luggers, and was the one man among us to whom the silent, taciturn Paul would talk—sometimes.

And only sometimes, for usually Paul was too much occupied in his work to say more than "Good-morning, boss," or "Good night," when, after he had been disencumbered of his diving gear, he went aft to rest and smoke his pipe. But one day, however, he went down in twenty-six fathoms, stayed too long, and was brought up unconscious. The mate and I saw the signals go up for assistance, hurried on board his lugger, and were just in time to save his life.

Two days later he came on board the tender, shook hands in his silent, undemonstrative way, and held out for my acceptance an old octagon American fifty dollar gold piece.

"Pure white, I mean. One thet you like well enough to marry?"

"Guess I'd like you to give her this 'slug' I got it outer the wreck of a ship that was sunk off Galveston in the 'sixties,' in the war."

It would have hurt him had I declined the gift. So I thanked him, and he nodded silently, filled his pipe and went back to the Montiara.

Nearly a year passed before we met again, for his lugger and six others went to New Guinea; and our next meeting was at Callie Harbour, where I found him down with malarial fever. Again I became his doctor, and ordered him to lie up.

"Guess I'll have ter, boss. But I jest hate loafin' around and seein' the other divers bringin' up shell in easy water." For he was receiving eighty pounds per month wages—diving or no diving—and hated to be idle.

"Paul," I said, as we lay stretched out under the wild mango tree, "would you mind telling me about that turn-up you had with the niggers at New Ireland, six years ago."

"Ef you like, boss." Then he added that he did not care about talking much at any time, as he was a mighty poor hand at the jaw-tackle....