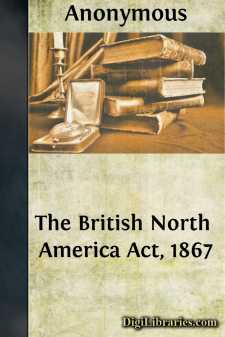 3. [Declaration of Union] It shall be lawful for the Queen, by and with the Advice of Her Majesty's Most Honourable Privy Council, to declare by Proclamation that, on and after a Day therein appointed, not being more than Six Months after the passing of this Act, the Provinces of Canada, Nova Scotia, and New Brunswick shall form and be One Dominion under the Name of Canada; and on and after that Day those Three Provinces shall form and be One Dominion under that Name accordingly.

4. [Construction of subsequent Provisions of Act.] The subsequent Provisions of this Act shall, unless it is otherwise expressed or implied, commence and have effect on and after the Union, that is to say, on and after the Day appointed for the Union taking effect in the Queen's Proclamation; and in the same Provisions, unless it is otherwise expressed or implied, the Name Canada shall be taken to mean Canada as constituted under this Act.

8. [Decennial Census.] In the general Census of the Population of Canada which is hereby required to be taken in the Year One thousand eight hundred and seventy-one, and in every Tenth Year thereafter, the respective Populations of the Four Provinces shall be distinguished.

9. [Declaration of Executive Power in the Queen.] The Executive Government and Authority of and over Canada is hereby declared to continue and be vested in the Queen.