The Branding Needle, or The Monastery of Charolles A Tale of the First Communal Charter 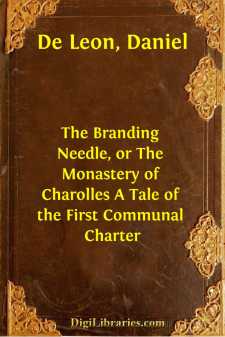 CHAPTER I. THE SIGNAL.

About fifty years have elapsed since King Clotaire had his son Chram burned alive together with the latter's wife and daughters. Let us forget the spectacle of desolation that conquered Gaul continues to present under the descendants of Clovis for the last fifty years, and rest our eyes upon the Valley of Charolles.

Oh, the fathers of the happy inhabitants who people that corner of the land did not bend their necks under the yoke of either Frankish seigneurs or Gallic bishops. No, no—they proved the old Gallic blood still flowed in their veins. The consequence is noticed in the picture of dignified felicity that the valley offers. Behold on the slope of the hill the cosy homes half shaded by vines, that carpet the walls and the ripe maturity and luxuriant quality of which are attested by their leaves and grapes that the autumn sun has reddened and gilt. Each of the houses is surrounded by a garden of flowers with a clump of shade-giving trees. Never did the eye of man dwell upon a more smiling village. A village? No; it rather resembles a large borough. From at least six to seven hundred houses are scattered on the slope of that hill, without counting the vast thatched structures that are situated below on the meadow, which is watered by a river that rises to the north of the valley, crosses it and forms its boundary far away where the horizon dips. Yonder the river parts in two arms; one flows eastward, the other westward, after bathing in its course the feet of a forest of gigantic chestnut trees from between the tops of which the roof of a tall stone building is perceived, surmounted by a cross of iron.

No, never yet was promised land better calculated to reward industry with abundance. Half way up the slope of the hill, the purple colored vines; above the vineyards, the agricultural fields, on which the stubble of rye and wheat left from the last harvest is here and there seen burning. The fertile acreage stretches up to the skirts of the forests that crown the surrounding eminences, within which the spacious valley is locked. Below the vineyards are meadowlands watered by the river. Numerous flocks of sheep and herds of horses browse and graze upon the succulent pasture. The bells of the bulls and wethers are heard tinkling their rural melody. Here and yonder carts drawn by oxen slowly roll over the ground where the stubble was burned the day before, or four-wheeled wagons slowly descend the slopes of the vineyards and wend their way towards the common wine-presses, which, together with the stables, the sheep-folds and the pig-sties, all alike common, are located in the neighborhood of the river. Several workshops also lie contiguous to the river; the wash and spinning houses, where the flax is prepared and the wool washed preparatorily to being transformed into warm clothing; there also are situated the tanneries, the forges, the mills equipped with enormous grind-stones. Peace, security, contentment and work are seen everywhere reflected in the valley. The sound of the beetles of the washerwomen and the curriers, the clang of the blacksmiths' hammers, the joyful cries of the men and women engaged at the vintage, the rythmic chant of the husbandmen keeping time to the even and slow gait of the draft-oxen, the rustic flute of the shepherds,—all these sounds, including the hum of the swarming bees, another set of indefatigable toilers, who are busily gathering the honey from the last autumnal flowers,—all these different sounds, from the furthest and vaguest to the nearest and loudest, mingle into one harmony that is at once sweet and imposing; it is the voice of labor and happiness rising heavenward as a continuous thanksgiving.

What is it that is going on in yonder house, which, although constructed like all the others, nevertheless, being nearest to the crest of the hill, seems to be the culminating point of the settlement, and commands a full view of the valley? Dressed in festive garb, the dwellers of that house are seen going in and out. They are seen heaping dry vine twigs in a sort of pyre at a goodly distance from the door. Young girls and children are seen and heard merrily bringing in their arms their contributions of dry wood, and running off again for more combustibles. A short old woman, with hair as white as silver, dainty, comely and still quick despite her advanced age, superintends the preparation of the pyre. As all old women are apt to do, she finds fault and sermonizes—but not in anger, on the contrary. Listen to her: