The Bostonians, Vol. II (of II) 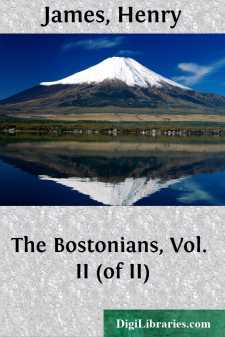 A little more than an hour after this he stood in the parlour of Doctor Tarrant's suburban residence, in Monadnoc Place. He had induced a juvenile maid-servant, by an appeal somewhat impassioned, to let the ladies know that he was there; and she had returned, after a long absence, to say that Miss Tarrant would come down to him in a little while. He possessed himself, according to his wont, of the nearest book (it lay on the table, with an old magazine and a little japanned tray containing Tarrant's professional cards—his denomination as a mesmeric healer), and spent ten minutes in turning it over. It was a biography of Mrs. Ada T. P. Foat, the celebrated trance-lecturer, and was embellished by a portrait representing the lady with a surprised expression and innumerable ringlets. Ransom said to himself, after reading a few pages, that much ridicule had been cast upon Southern literature; but if that was a fair specimen of Northern!—and he threw it back upon the table with a gesture almost as contemptuous as if he had not known perfectly, after so long a residence in the North, that it was not, while he wondered whether this was the sort of thing Miss Tarrant had been brought up on. There was no other book to be seen, and he remembered to have read the magazine; so there was finally nothing for him, as the occupants of the house failed still to appear, but to stare before him, into the bright, bare, common little room, which was so hot that he wished to open a window, and of which an ugly, undraped cross-light seemed to have taken upon itself to reveal the poverty. Ransom, as I have mentioned, had not a high standard of comfort and noticed little, usually, how people's houses were furnished—it was only when they were very pretty that he observed; but what he saw while he waited at Doctor Tarrant's made him say to himself that it was no wonder Verena liked better to live with Olive Chancellor. He even began to wonder whether it were for the sake of that superior softness she had cultivated Miss Chancellor's favour, and whether Mrs. Luna had been right about her being mercenary and insincere. So many minutes elapsed before she appeared that he had time to remember he really knew nothing to the contrary, as well as to consider the oddity (so great when one did consider it) of his coming out to Cambridge to see her, when he had only a few hours in Boston to spare, a year and a half after she had given him her very casual invitation. She had not refused to receive him, at any rate; she was free to, if it didn't please her. And not only this, but she was apparently making herself fine in his honour, inasmuch as he heard a rapid footstep move to and fro above his head, and even, through the slightness which in Monadnoc Place did service for an upper floor, the sound of drawers and presses opened and closed. Some one was "flying round," as they said in Mississippi. At last the stairs creaked under a light tread, and the next moment a brilliant person came into the room.

His reminiscence of her had been very pretty; but now that she had developed and matured, the little prophetess was prettier still. Her splendid hair seemed to shine; her cheek and chin had a curve which struck him by its fineness; her eyes and lips were full of smiles and greetings. She had appeared to him before as a creature of brightness, but now she lighted up the place, she irradiated, she made everything that surrounded her of no consequence; dropping upon the shabby sofa with an effect as charming as if she had been a nymph sinking on a leopard-skin, and with the native sweetness of her voice forcing him to listen till she spoke again. It was not long before he perceived that this added lustre was simply success; she was young and tender still, but the sound of a great applauding audience had been in her ears; it formed an element in which she felt buoyant and floated. Still, however, her glance was as pure as it was direct, and that fantastic fairness hung about her which had made an impression on him of old, and which reminded him of unworldly places—he didn't know where—convent-cloisters or vales of Arcady. At that other time she had been parti-coloured and bedizened, and she had always an air of costume, only now her costume was richer and more chastened. It was her line, her condition, part of her expression. If at Miss Birdseye's, and afterwards in Charles Street, she might have been a rope-dancer, to-day she made a "scene" of the mean little room in Monadnoc Place, such a scene as a prima donna makes of daubed canvas and dusty boards. She addressed Basil Ransom as if she had seen him the other week and his merits were fresh to her, though she let him, while she sat smiling at him, explain in his own rather ceremonious way why it was he had presumed to call upon her on so slight an acquaintance—on an invitation which she herself had had more than time to forget. His explanation, as a finished and satisfactory thing, quite broke down; there was no more impressive reason than that he had simply wished to see her. He became aware that this motive loomed large, and that her listening smile, innocent as it was, in the Arcadian manner, of mockery, seemed to accuse him of not having the courage of his inclination. He had alluded especially to their meeting at Miss Chancellor's; there it was that she had told him she should be glad to see him in her home.

"Oh yes, I remember perfectly, and I remember quite as well seeing you at Miss Birdseye's the night before. I made a speech—don't you remember? That was delightful."

"I don't mean my speech; I mean the whole thing. It was then I made Miss Chancellor's acquaintance. I don't know whether you know how we work together. She has done so much for me."

"Do you still make speeches?" Ransom asked, conscious, as soon as he had uttered it, that the question was below the mark.