The Bostonians, Vol. I (of II) 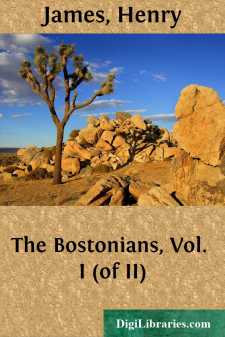 "Olive will come down in about ten minutes; she told me to tell you that. About ten; that is exactly like Olive. Neither five nor fifteen, and yet not ten exactly, but either nine or eleven. She didn't tell me to say she was glad to see you, because she doesn't know whether she is or not, and she wouldn't for the world expose herself to telling a fib. She is very honest, is Olive Chancellor; she is full of rectitude. Nobody tells fibs in Boston; I don't know what to make of them all. Well, I am very glad to see you, at any rate."

These words were spoken with much volubility by a fair, plump, smiling woman who entered a narrow drawing-room in which a visitor, kept waiting for a few moments, was already absorbed in a book. The gentleman had not even needed to sit down to become interested: apparently he had taken up the volume from a table as soon as he came in, and, standing there, after a single glance round the apartment, had lost himself in its pages. He threw it down at the approach of Mrs. Luna, laughed, shook hands with her, and said in answer to her last remark, "You imply that you do tell fibs. Perhaps that is one."

"Oh no; there is nothing wonderful in my being glad to see you," Mrs. Luna rejoined, "when I tell you that I have been three long weeks in this unprevaricating city."

"That has an unflattering sound for me," said the young man. "I pretend not to prevaricate."

"Dear me, what's the good of being a Southerner?" the lady asked. "Olive told me to tell you she hoped you will stay to dinner. And if she said it, she does really hope it. She is willing to risk that."

"Just as I am?" the visitor inquired, presenting himself with rather a work-a-day aspect.

Mrs. Luna glanced at him from head to foot, and gave a little smiling sigh, as if he had been a long sum in addition. And, indeed, he was very long, Basil Ransom, and he even looked a little hard and discouraging, like a column of figures, in spite of the friendly face which he bent upon his hostess's deputy, and which, in its thinness, had a deep dry line, a sort of premature wrinkle, on either side of the mouth. He was tall and lean, and dressed throughout in black; his shirt-collar was low and wide, and the triangle of linen, a little crumpled, exhibited by the opening of his waistcoat, was adorned by a pin containing a small red stone. In spite of this decoration the young man looked poor—as poor as a young man could look who had such a fine head and such magnificent eyes. Those of Basil Ransom were dark, deep, and glowing; his head had a character of elevation which fairly added to his stature; it was a head to be seen above the level of a crowd, on some judicial bench or political platform, or even on a bronze medal. His forehead was high and broad, and his thick black hair, perfectly straight and glossy, and without any division, rolled back from it in a leonine manner. These things, the eyes especially, with their smouldering fire, might have indicated that he was to be a great American statesman; or, on the other hand, they might simply have proved that he came from Carolina or Alabama. He came, in fact, from Mississippi, and he spoke very perceptibly with the accent of that country. It is not in my power to reproduce by any combination of characters this charming dialect; but the initiated reader will have no difficulty in evoking the sound, which is to be associated in the present instance with nothing vulgar or vain. This lean, pale, sallow, shabby, striking young man, with his superior head, his sedentary shoulders, his expression of bright grimness and hard enthusiasm, his provincial, distinguished appearance, is, as a representative of his sex, the most important personage in my narrative; he played a very active part in the events I have undertaken in some degree to set forth....