The Book of the Thousand Nights and a Night - Volume 01 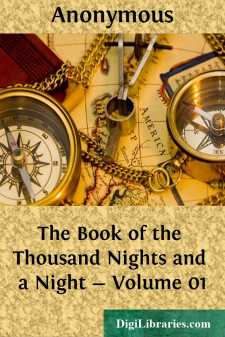 This work, labourious as it may appear, has been to me a labour of love, an unfailing source of solace and satisfaction. During my long years of official banishment to the luxuriant and deadly deserts of Western Africa, and to the dull and dreary half clearings of South America, it proved itself a charm, a talisman against ennui and despondency. Impossible even to open the pages without a vision starting into view; with out drawing a picture from the pinacothek of the brain; without reviving a host of memories and reminiscences which are not the common property of travellers, however widely they may have travelled. From my dull and commonplace and "respectable" surroundings, the Jinn bore me at once to the land of my pre-direction, Arabia, a region so familiar to my mind that even at first sight, it seemed a reminiscence of some by gone metem-psychic life in the distant Past. Again I stood under the diaphanous skies, in air glorious as aether, whose every breath raises men's spirits like sparkling wine. Once more I saw the evening star hanging like a solitaire from the pure front of the western firmament; and the after glow transfiguring and transforming, as by magic, the homely and rugged features of the scene into a fairy land lit with a light which never shines on other soils or seas. Then would appear the woollen tents, low and black, of the true Badawin, mere dots in the boundless waste of lion tawny clays and gazelle brown gravels, and the camp fire dotting like a glow worm the village centre. Presently, sweetened by distance, would be heard the wild weird song of lads and lasses, driving or rather pelting, through the gloaming their sheep and goats; and the measured chant of the spearsmen gravely stalking behind their charge, the camels; mingled with bleating of the flocks and the bellowing of the humpy herds; while the reremouse flitted overhead with his tiny shriek, and the rave of the jackal resounded through deepening glooms, and—most musical of music—the palm trees answered the whispers of the night breeze with the softest tones of falling water.

And then a shift of scene. The Shaykhs and "white beards" of the tribe gravely take their places, sitting with outspread skirts like hillocks on the plain, as the Arabs say, around the camp fire, whilst I reward their hospitality and secure its continuance by reading or reciting a few pages of their favourite tales. The women and children stand motionless as silhouettes outside the ring; and all are breathless with attention; they seem to drink in the words with eyes and mouths as well as with ears. The most fantastic flights of fancy, the wildest improbabilities, the most impossible of impossibilities, appear to them utterly natural, mere matters of every day occurrence. They enter thoroughly into each phase of feeling touched upon by the author: they take a personal pride in the chivalrous nature and knightly prowess of Taj al-Mulúk; they are touched with tenderness by the self sacrificing love of AzÃ­zah; their mouths water as they hear of heaps of untold gold given away in largesse like clay; they chuckle with delight every time a Kázi or a FakÃ­r—a judge or a reverend—is scurvily entreated by some Pantagruelist of the Wilderness; and, despite their normal solemnity and impassibility, all roar with laughter, sometimes rolling upon the ground till the reader's gravity is sorely tried, at the tales of the garrulous Barber and of Ali and the Kurdish Sharper. To this magnetising mood the sole exception is when a Badawi of superior accomplishments, who sometimes says his prayers, ejaculates a startling "Astagh-faru'llah"—I pray Allah's pardon!—for listening, not to Carlyle's "downright lies," but to light mention of the sex whose name is never heard amongst the nobility of the Desert.

Nor was it only in Arabia that the immortal Nights did me such notable service: I found the wildlings of Somali land equally amenable to its discipline; no one was deaf to the charm and the two women cooks of my caravan, on its way to Harar, were in continently dubbed by my men "Shahrazad" and "Dinazad."

It may be permitted me also to note that this translation is a natural outcome of my Pilgrimage to Al-Medinah and Meccah. Arriving at Aden in the (so called) winter of 1852, I put up with my old and dear friend, Steinhaeuser, to whose memory this volume is inscribed; and, when talking over Arabia and the Arabs, we at once came to the same conclusion that, while the name of this wondrous treasury of Moslem folk lore is familiar to almost every English child, no general reader is aware of the valuables it contains, nor indeed will the door open to any but Arabists. Before parting we agreed to "collaborate" and produce a full, complete, unvarnished, uncastrated copy of the great original, my friend taking the prose and I the metrical part; and we corresponded upon the subject for years. But whilst I was in the Brazil, Steinhaeuser died suddenly of apoplexy at Berne in Switzerland and, after the fashion of Anglo India, his valuable MSS. left at Aden were dispersed, and very little of his labours came into my hands....