The Book of Good Manners; a Guide to Polite Usage for All Social Functions 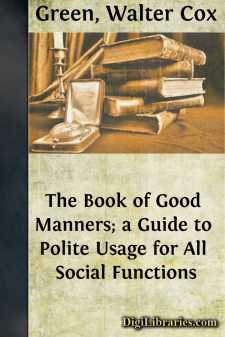 MEN. A man should be addressed as Mr. James J, Wilson, or James J. Wilson, Esq. Either the Mr. or the Esq. may be used, but not the two together.

The title belonging to a man should be given. It is not customary to use Mr. or Esq. when Jr. or Sr. is used.

A woman should never be given her husband's       official title, as Mrs. Judge Wilson.

ADDRESSING PERSONS. Young girls should be spoken       of as Minnie Wilson, and not as Miss Minnie,       but are personally addressed as Miss Minnie.       Only the greatest intimacy warrants a man       in addressing a young girl as Minnie.

Parents should introduce their daughter       as My daughter Minnie, but should speak       of them before servants as Miss Minnie.

A married woman should be spoken of as       Mrs. Agnes Wilson, and personally addressed       as Mrs. Wilson.

ADDRESSING AND SIGNING LETTERS. All answers to       invitations should be addressed to the party       issuing them.

For forms of addressing persons with titles,       as Mayor, see under that title—as, Mayor,       Governor.

The letters may end, Sincerely yours, or       Very truly yours, or I remain yours with       kindest regards.

AFTERNOON CALLS. These should be made between three and half-past five, and if possible on regular at home days.

In making an afternoon call a man should wear the regulation afternoon dress.

DRESS—MEN. Afternoon dress consists of a double-breasted frock coat of dark material, and waistcoat, either single or double- breasted, of same, or of some fancy material of late design. The trousers should be of light color, avoiding of course extremes in patterns....