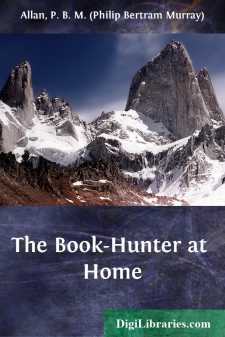 CHAPTER I ADVENTURES AMONG BOOKS 'Thou shalt make castels thanne in Spayne.' Chaucer.

t is a sad truth that bargains are met with more frequently in our youth than in our age. The sophist may argue that age begets philosophy, and that philosophy contemns all worldly things; yet certain it is that the book-hunter, one of the most philosophical of beings, remains on the look-out for bargains to the very end of his career. Nevertheless, it is a fact that in youth alone do we make those great bargains which lay the foundations of our careers as book-hunters.

It is this sad truth which fosters in most of us the belief that we live in a decadent age, and that the days of our youth were infinitely more seemly than those which we now endure. But it is we who have changed: the bargains are still there, and may still be had at the cost of youthful energy and enthusiasm.

'Ah, but you can't get the bargains nowadays that you could when I was a young man,' says the elderly bookseller, with a knowing shake of his head. Can't you! Then mankind must have changed strangely since the period of this sage's youth. Bargains, and rich ones too, in everything that is bought and sold, are made every day and will continue to be made so long as human nature endures, bargains in books no less among them.

The rich finds of which the aged bookseller dreams are bargains only in the light of present-day prices. As a matter of fact, the great majority of them were not really bargains at all. He may bitterly lament having parted with a copy of the first edition of the 'Compleat Angler,' in the 'sixties for twenty guineas, but he overlooks the fact that that was then its market value. Had he asked a thousand pounds for it, his sanity would certainly have been open to question. 'Why, when I was a boy,' he says, 'you could buy first editions of Shelley, Keats, or Scott for pence.' Precisely: which was their current value; by no stretch of the imagination can they be considered bargains. His business is, and has always been, to buy and sell; not to hoard books on the chance that they will become valuable 'some day.' Neither can it be urged that 'people' (by which he means collectors) 'did not know so much about books fifty years ago.' Collectors know, and have ever known, all that they need for the acquisition of their particular desiderata. If they were ignorant of the prices which volumes common in their day would realise at some future period, why, so were the dealers and every one else concerned! Judging by analogy, we have every reason to believe that many volumes which we come across almost daily on the bookstalls, marked, perhaps, a few pence, will be fought for one day across the auction-room table.

The chief reason why the elderly bookseller no longer comes across these advantageous purchases is that he has passed the age (though he does not know it) at which bargains are to be had. But bargains are not encountered, they are made. It is the youthful vigour and enthusiasm of the young collector, prompting him into the byways and alleys of book-land, that bring bargains to his shelves....