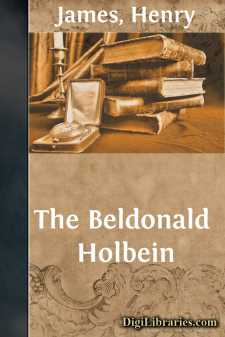 Mrs. Munden had not yet been to my studio on so good a pretext as when she first intimated that it would be quite open to me—should I only care, as she called it, to throw the handkerchief—to paint her beautiful sister-in-law.  I needn’t go here more than is essential into the question of Mrs. Munden, who would really, by the way, be a story in herself.  She has a manner of her own of putting things, and some of those she has put to me—!  Her implication was that Lady Beldonald hadn’t only seen and admired certain examples of my work, but had literally been prepossessed in favour of the painter’s “personality.”  Had I been struck with this sketch I might easily have imagined her ladyship was throwing me the handkerchief.  “She hasn’t done,” my visitor said, “what she ought.”

“Do you mean she has done what she oughtn’t?”

“Nothing horrid—ah dear no.”  And something in Mrs. Munden’s tone, with the way she appeared to muse a moment, even suggested to me that what she “oughtn’t” was perhaps what Lady Beldonald had too much neglected.  “She hasn’t got on.”

“What’s the matter with her?”

“Well, to begin with, she’s American.”

“But I thought that was the way of ways to get on.”

“So many Americans?” I asked.

“But if your sister-in-law’s way is to be beautiful—?”

“Oh there are different ways of that too.”

“And she hasn’t taken the right way?”

“Well,” my friend returned as if it were rather difficult to express, “she hasn’t done with it—”

Mrs. Munden in a manner corrected me, but it was difficult to express.  “My brother at all events was certainly selfish.  Till he died she was almost never in London; they wintered, year after year, for what he supposed to be his health—which it didn’t help, since he was so much too soon to meet his end—in the south of France and in the dullest holes he could pick out, and when they came back to England he always kept her in the country.  I must say for her that she always behaved beautifully.  Since his death she has been more in London, but on a stupidly unsuccessful footing.  I don’t think she quite understands.  She hasn’t what I should call a life.  It may be of course that she doesn’t want one.  That’s just what I can’t exactly find out.  I can’t make out how much she knows.”

“I can easily make out,” I returned with hilarity, “how much you do!”

“Too old for what?” I persisted.

“For anything.  Of course she’s no longer even a little young; only preserved—oh but preserved, like bottled fruit, in syrup!  I want to help her if only because she gets on my nerves, and I really think the way of it would be just the right thing of yours at the Academy and on the line.”

“But suppose,” I threw out, “she should give on my nerves?”

“Oh she will.  But isn’t that all in the day’s work, and don’t great beauties always—?”

“You don’t,” I interrupted; but I at any rate saw Lady Beldonald later on—the day came when her kinswoman brought her, and then I saw how her life must have its centre in her own idea of her appearance.  Nothing else about her mattered—one knew her all when one knew that.  She’s indeed in one particular, I think, sole of her kind—a person whom vanity has had the odd effect of keeping positively safe and sound.  This passion is supposed surely, for the most part, to be a principle of perversion and of injury, leading astray those who listen to it and landing them sooner or later in this or that complication; but it has landed her ladyship nowhere whatever—it has kept her from the first moment of full consciousness, one feels, exactly in the same place.  It has protected her from every danger, has made her absolutely proper and prim.  If she’s “preserved,” as Mrs....