The Battle of the Bays 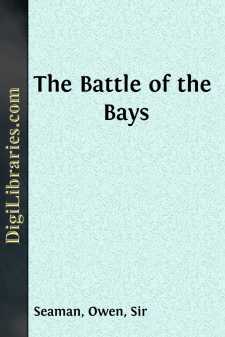 In the days of my season of salad,

When the down was as dew on my cheek,

And for French I was bred on the ballad,

For Greek on the writers of Greek,––

Then I sang of the rose that is ruddy,

Of ‘pleasure that winces and stings,’

Of white women and wine that is bloody,

Of Delight that is dear as Desi-er,

And Desire that is dear as Delight;

Of the fangs of the flame that is fi-er,

Of the bruises of kisses that bite;

Of embraces that clasp and that sever,

Of blushes that flutter and flee

Round the limbs of Dolores, whoever

I sang of false faith that is fleeting

As froth of the swallowing seas,

Time’s curse that is fatal as Keating

Is fatal to amorous fleas;

Of the wanness of woe that is whelp of

The lust that is blind as a bat––

Of kings and the creatures of kings,

I shouted on Freedom to shake her

Feet loose of the fetter that clings;

And lifting a mutinous lid,

To all monarchs and matrons I said I

Thee I sang, and thy loves, O Thalassian,

O ‘noble and nude and antique!’

Unashamed in the ‘fearless old fashion’

Ere washing was done by the week;

When the ‘roses and rapture’ that girt you

Were visions of delicate vice,

And the ‘lilies and languors of virtue’

Not nearly so nice.

O delights of the time of my teething,

Foam-yeast of a youth in its seething

On blasted and blithering sand!

Snake-crowned on your tresses and belted

With blossoms that coil and decay,

Ye are gone; ye are lost; ye are melted

Hushed now is the bibulous bubble

Of ‘lithe and lascivious’ throats;

Long stript and extinct is the stubble

Of hoary and harvested oats;

From the sweets that are sour as the sorrel’s

The bees have abortively swarmed;

I have written a loyal Armada,

And posed in a Jubilee pose;

I have babbled of babies and played a

New tune on the turn of their toes;

Washed white from the stain of Astarte,

My books any virgin may buy;

And I hear I am praised by a party

When erased are the records, and rotten

The meshes of memory’s net;

When the grace that forgives has forgotten

The things that are good to forget;

When the trill of my juvenile trumpet

Is dead and its echoes are dead;

Then the laurel shall lie on the crumpet

And crown of my head!

2.FOR THE ALBUMS OF CROWNED HEADS ONLY. (AFTER SIR E. A.)

1. From the third Sa’dine Box of the eighth Gazelle of Ghazal.

See my heart rises up like a bubble, and bursts in my throat,

And the dimples that draw it are Three, like the Men in a Boat....