The Battle of Blenheim 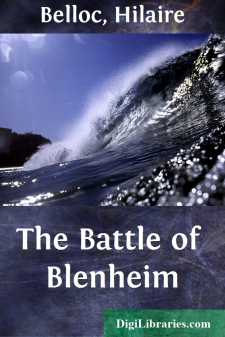 PART I THE POLITICAL OBJECTIVE

The proper understanding of a battle and of its historical significance is only possible in connection with the campaign of which it forms a part; and the campaign can only be understood when we know the political object which it was designed to serve.

A battle is no more than an incident in a campaign. However decisive in its immediate result upon the field, its value to the general conducting it depends on its effect upon the whole of his operations, that is, upon the campaign in which he is engaged.

A campaign, again, is but the armed effort of one society to impose its will in some particular upon another society. Every such effort must have a definite political object. If this object is served the campaign is successful. If it is not served the campaign is a failure. Many a campaign which began or even concluded with a decisive action in favour of one of the two belligerents has failed because, in the result, the political object which the victory was attempting was not reached. Conversely, many a campaign, the individual actions of which were tactical defeats, terminated in favour of the defeated party, upon whom the armed effort was not sufficient to impose the will of his adversary, or to compel him to that political object which the adversary was seeking. In other words, military success can be measured only in terms of civil policy.

It is therefore essential, before approaching the study of any action, even of one so decisive and momentous as the Battle of Blenheim, to start with a general view of the political situation which brought about hostilities, and of the political object of those hostilities; only then, after grasping the measure in which the decisive action in question affected the whole campaign, can we judge how the campaign, in its turn, compassed the political end for which it was designed.

The war whose general name is that of the Spanish Succession was undertaken by certain combined powers against Louis XIV. of France (and such allies as that monarch could secure upon his side) in order to prevent the succession of his grandson to the crown of Spain.

With the various national objects which Holland, England, the Empire and certain of the German princes, as also Savoy and Portugal, may have had in view when they joined issue with the French monarch, military history is not concerned. It is enough to know that their objects, though combining them against a common foe, were not identical, and the degrees of interest with which they regarded the compulsion of Louis XIV. to forego the placing of his grandson upon the Spanish throne were very different. It is this which will largely explain the various conduct of the allies during the progress of the struggle; but all together sought the humiliation of Louis, and joined on the common ground of the Spanish Succession.

The particular object, then, of the campaign of Blenheim (and of those campaigns which immediately preceded and succeeded it) was the prevention of the unison of the crowns of France and Spain in the hands of two branches of the same family....