The Arts of Persia & Other Countries of Islam 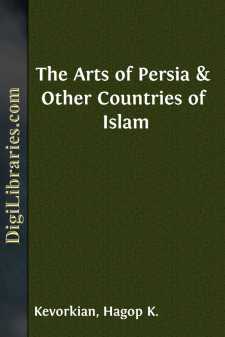 THIS exhibition has been arranged with a desire to meet the convenience of those who are interested in manifestations of the arts of different countries over which Islam held sway at one time or other in the past. An effort has been made to show under one roof representative examples of works produced at different epochs and stages of the civilizations referred to, so that they may be seen, and perhaps studied, with the minimum expenditure of time.

Fine examples of many branches of the arts of these peoples are in permanent exhibitions at the Metropolitan Museum, New York, and the museums of great cities throughout the country. It is difficult to find adequate words to describe the enchanting atmosphere of the halls at the Metropolitan Museum where Near Eastern art is installed; and the same can truly be said of the Museum of Fine Arts, Boston, and the University of Pennsylvania Museum, Philadelphia. These exhibitions must inevitably contribute to the enjoyment and education of countless visitors to these institutions, and will continue to do so in increasing degree to the enjoyment of generations to come.

The present exhibition does not comprise a vast number of objects. Its claim to attention lies in the fact that it includes an important series of really first class works which are also of great historical importance. There will be on view as well some comparatively new types of objects of æsthetic and archæological interest, obtained as the result of recent excavations.

The briefness of time available precluded the possibility of compiling a catalogue, as was at first intended. The present booklet is issued to explain the scope of the exhibition, and extend a cordial invitation to visit it.

One of the eight illustrations for a XIIIth Century Persian Manuscript entitled, "History of Tabari", compiled A.H. 310 (A.D. 922). The present copy is a subsequent one of the Persian version, translated by al B'ala'mi, A.H. 352.

It is interesting to note that Tabari records in the book here referred to, that three messages were sent by Muhammad to Khusraw Parniz, imparting the divine warnings. One of the messages, as recorded in an old Manuscript entitled Nihayat ul-Irab, reads:

"In the name of God, the merciful, the compassionate. From Muhammad the Apostle of God to Khusraw son of Hurmazd. But to proceed. Verily I extol unto thee God, beside whom there is no other God. He it is who guarded me when I was an orphan, and made me rich when I was destitute, and guided me when I was straying in error. Only he who is bereft of understanding, and over whom calamity triumphs, rejects the message which I am sent to announce. O Khusraw, submit and thou shalt be safe, or else prepare to wage with God and with his Apostle a war which shall not find them helpless. Farewell."

The rise of Islam and its rapid advent to power, is perhaps the most surprising chapter of the history of mankind. The great empires, Persian and Byzantine, which were subjected to the urgent onslaught of this rising power may have been in an enfeebled condition as a result of excess of despotism and internal dissensions, as historians affirm; but that the element of the power must have been in the rationality of the principles contained in the teaching, there can be no doubt.

"It was undoubtedly to Islam, that simple yet majestic creed of which no unprejudiced student can ignore the grandeur, that Arabs owed the splendid part which they were destined to play in the history of civilization....