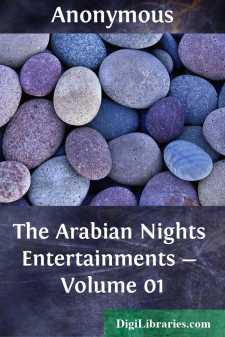 This, the "Aldine Edition" of "The Arabian Nights Entertainments," forms the first four volumes of a proposed series of reprints of the Standard works of fiction which have appeared in the English language.

It is our intention to publish the series in an artistic way, well illustrating a text typographically as perfect as possible. The texts in all cases will be carefully chosen from approved editions.

The series is intended for those who appreciate well printed and illustrated books, or who are in want of a handy and handsome edition of such works to place upon their bookshelves.

The exact origin of the Tales, which appear in the Arabic as "The Thousand and One Nights," is unknown. The Caliph Haroon al Rusheed, who, figures in so lifelike a manner in many of the stories, was a contemporary of the Emperor Charlemagne, and there is internal evidence that the collection was made in the Arabic language about the end of the tenth century.

They undoubtedly convey a picturesque impression of the manners, sentiments, and customs of Eastern Mediaeval Life.

The stories were translated from the Arabic by M. Galland and first found their way into English in 1704, when they were retranslated from M. Galland's French text and at once became exceedingly popular.

This process of double translation had great disadvantages; it induced Dr. Jonathan Scott, Oriental Professor, to publish in 1811, a new edition, revised and corrected from the Arabic.

It is upon this text that the present edition is formed.

It will be found free from that grossness which is unavoidable in a strictly literal translation of the original into English; and which has rendered the splendid translations of Sir R. Burton and Mr. J. Payne quite unsuitable as the basis of a popular edition, though at the same time stamping the works as the two most perfect editions for the student.

The scholarly translation of Lane, by the too strict an adherence to Oriental forms of expression, and somewhat pedantic rendering of the spelling of proper names, is found to be tedious to a very large number of readers attracted by the rich imagination, romance, and humour of these tales.

The chronicles of the Sassanians, ancient kings of Persia, who extended their empire into the Indies, over all the adjacent islands, and a great way beyond the Ganges, as far as China, acquaint us, that there was formerly a king of that potent family, who was regarded as the most excellent prince of his time. He was as much beloved by his subjects for his wisdom and prudence, as he was dreaded by his neighbours, on account of his velour, and well-disciplined troops. He had two sons; the elder Shier-ear, the worthy heir of his father, and endowed with all his virtues; the younger Shaw-zummaun, a prince of equal merit.

After a long and glorious reign, this king died; and Shier-ear mounted his throne. Shaw-zummaun, being excluded from all share in the government by the laws of the empire, and obliged to live a private life, was so far from envying the happiness of his brother, that he made it his whole business to please him, and in this succeeded without much difficulty. Shier-ear, who had naturally a great affection the prince his brother, gave him the kingdom of Great Tartary....