The Annual Monitor for 1851 or, Obituary of the members of the Society of Friends in Great Britain and Ireland, for the year 1850 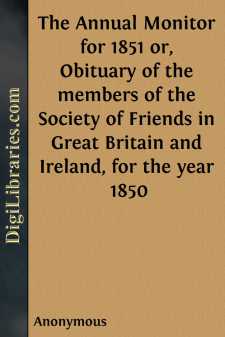 We have again to present to our friends the Report of the Annual Mortality in the Society of Friends, in Great Britain and Ireland.  It has frequently been observed, how nearly the number of deaths in each year has approximated, but we have this year to notice a considerable diminution in the annual return.  We are not disposed, however, to attribute the diminished numbers, chiefly to any special cause connected with health, but consider it rather as one of those fluctuations which are ever found to arise in a series of years, in the mortality of a small community.  The number of the dying, however, may be expected to bear, as respects the average, a pretty uniform relation to the number of the living.  And if the fact be, as all our late inquiries lead us to believe it is, that we are, though slowly, a diminishing body, we must expect that our average number of deaths will also be found gradually to diminish.

We have often anxiously pondered over the question,—Why the Society of Friends should be a diminishing body?  And we propose to give in this place a few of the thoughts which have been suggested to us in the course of our consideration.

In the first place, let us notice the natural causes which tend to the decrease of our Society.  We have formerly shown that the mortality among our members is less than in the community at large, which so far as it extends, is of course a reason for the increase rather than the diminution of our numbers.  But then we have, on the other side, the well-ascertained fact, that whilst in the community at large, the registered births exceed the deaths, by 45 per cent; in the Society of Friends, the registered deaths actually exceed the births!  The cause of this fact is to be found, not only in connection with the number who marry out of the Society, but also in the operation of that prudential check on entering into the married state, which will always prevail amongst a moral people, where the means of subsistence cannot easily and with certainty be obtained.  But to whatever we may attribute the cause, the fact itself is a complete answer to the question—Why we are a diminishing rather than an increasing people?

It may be said,—Why are not our religious principles aggressive?—Why, if they be true, do they not find converts among the various Christian communities of our land?—Why, as in the early times of our Society, are there not numerous conversions, and fresh bodies of warm-hearted, and sound-minded believers, added to our numbers?—These are deeply important and very interesting questions, and we are willing to offer a few thoughts upon them, with the seriousness and modesty with which it becomes us to speak on the subject.

We believe, that a mistaken view prevails, in regard to the truest Christian principle being that which will be accepted by the largest number of persons.  The experience of all the past ages of the Church contradicts the assumption, and shows clearly that there is in man a deep-seated opposition to the acceptance of divine truth in its purity and simplicity.  True vital religion has ever called for the service of man’s heart to God, and in every age, this allegiance has been the state of the few, rather than of the many.  The history of the ancient church is full of illustrations of this truth.  Whilst Moses lingered on the Mount, whence the children of Israel knew that the law was to be given, and from whence such evident demonstrations of the divine power had been manifest to the people, they were employed in making the golden calf to go before them, and crying “these are thy Gods, O Israel!”  And when they had received the law, written by the finger of God, and were somewhat humbled under the correction of their sins, how few were there, who carried out its injunctions in their genuine spirit, and how many were there, who from time to time, defiled themselves by the idolatrous service of other gods.  Even when brought by a strong hand, and an outstretched arm, attended by many palpable miracles which were wrought on their behalf, they were seated in the “Land flowing with milk and honey,” which had been promised to their fathers; how prone were they constantly to desert even the profession of their faith, and to serve the gods of the nations which they were sent to destroy; yet in all these times there were a few, and it was probably comparatively but a few, who had not bowed the knee to Baal.

We have evidence of the same fact in the history of Christianity.  The beautiful example of the Saviour, and the wonderful miracles which he performed—all for the good of man—failed to attract the high boasted reason of the Greek, or the Roman, or to soften the obduracy of the blind and hard Pharisaic hearted Jew: it was still the few who had sympathy with the character He exhibited, and the truths which He spoke, and who found Him to be to their souls “the power of God unto salvation.”  And even when these few were gathered together, and under the extraordinary effusion of the Holy Spirit, many were added to them, and “the multitude of them that believed were of one heart and one soul,” they were still comparatively but a few....