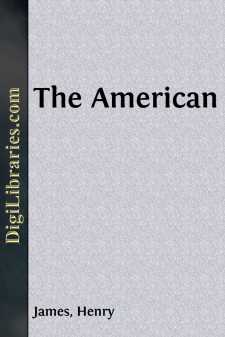 On a brilliant day in May, in the year 1868, a gentleman was reclining at his ease on the great circular divan which at that period occupied the centre of the Salon Carre, in the Museum of the Louvre. This commodious ottoman has since been removed, to the extreme regret of all weak-kneed lovers of the fine arts, but the gentleman in question had taken serene possession of its softest spot, and, with his head thrown back and his legs outstretched, was staring at Murillo's beautiful moon-borne Madonna in profound enjoyment of his posture. He had removed his hat, and flung down beside him a little red guide-book and an opera-glass. The day was warm; he was heated with walking, and he repeatedly passed his handkerchief over his forehead, with a somewhat wearied gesture. And yet he was evidently not a man to whom fatigue was familiar; long, lean, and muscular, he suggested the sort of vigor that is commonly known as "toughness." But his exertions on this particular day had been of an unwonted sort, and he had performed great physical feats which left him less jaded than his tranquil stroll through the Louvre. He had looked out all the pictures to which an asterisk was affixed in those formidable pages of fine print in his Badeker; his attention had been strained and his eyes dazzled, and he had sat down with an aesthetic headache. He had looked, moreover, not only at all the pictures, but at all the copies that were going forward around them, in the hands of those innumerable young women in irreproachable toilets who devote themselves, in France, to the propagation of masterpieces, and if the truth must be told, he had often admired the copy much more than the original. His physiognomy would have sufficiently indicated that he was a shrewd and capable fellow, and in truth he had often sat up all night over a bristling bundle of accounts, and heard the cock crow without a yawn. But Raphael and Titian and Rubens were a new kind of arithmetic, and they inspired our friend, for the first time in his life, with a vague self-mistrust.

An observer with anything of an eye for national types would have had no difficulty in determining the local origin of this undeveloped connoisseur, and indeed such an observer might have felt a certain humorous relish of the almost ideal completeness with which he filled out the national mould. The gentleman on the divan was a powerful specimen of an American. But he was not only a fine American; he was in the first place, physically, a fine man. He appeared to possess that kind of health and strength which, when found in perfection, are the most impressive—the physical capital which the owner does nothing to "keep up." If he was a muscular Christian, it was quite without knowing it. If it was necessary to walk to a remote spot, he walked, but he had never known himself to "exercise." He had no theory with regard to cold bathing or the use of Indian clubs; he was neither an oarsman, a rifleman, nor a fencer—he had never had time for these amusements—and he was quite unaware that the saddle is recommended for certain forms of indigestion....